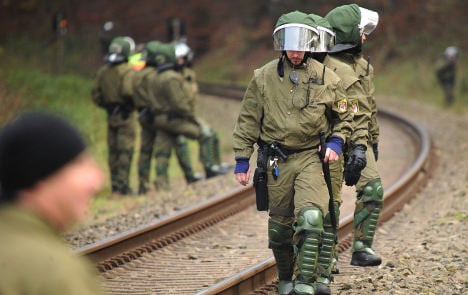 The train with 11 wagons of reprocessed German nuclear waste crossed the Franco-German border early on Friday and then made a stop at the small German town of Neunkirchen to change engines.

Television pictures showed police removing half a dozen protesters from the train tracks as they attempted to delay the journey.

“Everything here is peaceful, people are standing calmly on the bridge,” a police spokesman said earlier in the afternoon, but there have been several reports of clashes between police and protesters since then, with two police cars being set on fire in Wendland in Lower Saxony.

Jochen Stay, a spokesman for the anti-nuclear group Ausgestrahlt (Irradiated), told NTV public television that further attempts would likely be made to block the train as it neared its destination in Gorleben, northeastern Germany.

Speaking in Dannenberg, some 20 kilometres (12 miles) from Gorleben, where the waste will be stored, he said: “There will of course be action taken to block it when it approaches. People will block the tracks and the roads.”

“But we do not want this to escalate. We want the police to act sensibly and appropriately with people,” added Stay.

Late Thursday, police had deployed water cannon and tear gas against a few hundred protesters who tried to block the road near Gorleben. There were a handful of arrests and light injuries on both sides.

But the police methods angered the protesters. “The police reacted in a completely disproportionate manner. We call on them to use other methods,” said one demonstrator Kerstin Rudek.

An AFP photographer in Metzinger, also near Gorleben, said 10 or so masked people had on Friday attacked police with bricks and smoke bombs and managed to escape arrest.

Last November, at the height of a furious debate over nuclear power in Germany, tens of thousands turned out to protest against the shipment, managing to delay the train by a whole day.

Activists played a sometimes violent game of cat-and-mouse with police, with stunts including sit-ins, abseiling from bridges into the train’s path, removing stones supporting train tracks and even shepherding sheep and goats into the convoy’s way.

Since then, however, the German government has decided to abandon atomic power in the wake of March’s nuclear disaster in Fukushima, Japan, and this appeared to have dampened the protests.

Organizers have said they were expecting some 20,000 people to protest against the train, fewer than half the number that turned out this time last year. Opposing them were deployed a similar number of police.

Nevertheless, Martin Mesemann, from the organization “Widerstandsnest Metzingen” (“Metzingen Resistance Nest”) said he was hoping for the same number of people as last year.

“The government has tried to say that everything has changed with the nuclear exit, but nothing has changed. Reactors in Germany are continuing to function and produce highly radioactive waste,” added Mesemann.

And the train also ran into trouble after leaving its yard operated by French nuclear giant Areva in Valognes, in Normandy, on Wednesday. It was delayed by violent protests as it began its 1,100-kilometre journey to Gorleben.

Protected by several hundred riot police, the train stopped overnight Thursday at the station of Remilly, just outside the town of Metz in eastern France. It chugged out of there at around 9:00 a.m. on Friday.

This was expected to be the last such shipment from France, but from 2014, nuclear waste will be transported to Germany from a British power plant in Sellafield.

There has long been widespread public opposition in Germany to nuclear power, which many believe presents an unacceptable radioactive threat to public health and the environment.

In June, Chancellor Angela Merkel’s government agreed to halt all German reactors by 2022, forcing energy suppliers to close the plants. In the meantime, Germany will no longer send nuclear waste for reprocessing in France, but will instead stockpile it until a way is found to make it safe.