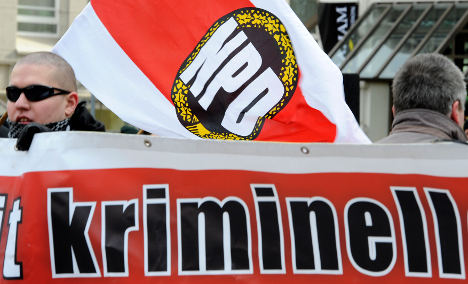 The survey, by polling agency Forschungsgruppe Wahlen, revealed that 77

percent of Germans want the National Democratic Party outlawed, with 19 percent saying it should remain legal. Four percent said they did not know.

Germany has been stunned by the discovery of a small neo-Nazi group believed to be responsible for the unsolved murders of eight men of Turkish origin and a Greek between 2000 and 2006 as well as a policewoman in 2007.

The case has sparked allegations that the country may have turned a blind eye to the threat posed by right-wing extremism, despite Germany’s deep-seated shame over its Nazi past. Chancellor Angela Merkel has said the murders were a “disgrace for Germany.”

Meanwhile a working group has been set up to examine whether to pursue a ban of the NPD.

Police have in custody three suspected accomplices of the suspected killing cell – the National Social Underground (NSU) – two members of which were found dead this month in an apparent suicide.

The country’s president, Christian Wulff, announced on Thursday there would be a remembrance service for the victims in February. Berlin has already pledged to compensate their families.

It has never won seats in the country’s federal parliament but has gained representation in several regional parliaments.

The survey of 1,276 people was conducted between November 22 and 24, the polling agency said.