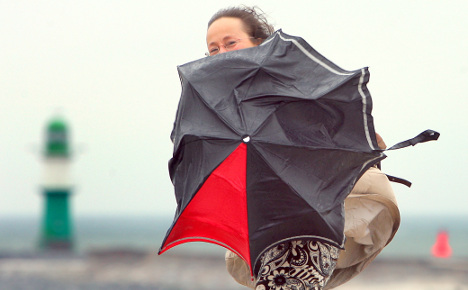 On Friday night, light rain will begin to fall in southern Germany and along the coastline in the north. Strong winds will pick up along the coast and in higher regions. In more exposed mountainous areas, warnings have been issued of gale force winds during the night.

“A low pressure system over the Atlantic has developed into a serious storm. It will be battering northern Scandinavia on Saturday, but we will feel the effects, as stormy gusts hit Germany” said Dorothea Patzold of the DWD.

By Saturday, the patches of rain in the south will ease, with only sporadic showers falling on coastal areas. Temperatures in the north may reach a practically tropical 10 degrees. The rest of the country will enjoy a chillier weekend, as temperatures in predominantly cloudy areas will barely go above freezing.

Coastal regions will remain damp over Saturday night, with a sprinkling of rainfall in many areas. The of the country will be clear with patches of fog. In the clearest areas there will be a risk of frost, as temperatures dip below zero. In areas covered in cloud, night time highs of 6 degrees have been predicted.

Sunday night may see a light frost in colder regions, giving way to a fair day on Monday, where only very light rain will fall south of the Danube.

Monday daytime will be a pleasant 11 degrees in much of the country, but temperatures will plummet below zero as the sun sets.