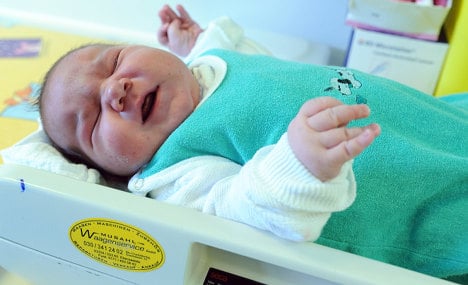 The 6-kilogramme (13-pound) boy was born at Berlin’s Charité hospital to a 40-year-old, 240-kilogramme (528-pound) woman who also had gestational diabetes and most likely a metabolic disorder, according to doctors.

Such newborns are often delivered via caesarean section because they can suffer from oxygen deficiency or shoulder dislocations during birth.

But in this case the mother opted for a vaginal birth, which lasted seven hours and luckily went off without a hitch.

“She insisted on a vaginal birth despite the very high risk,” said Wolfgang Henrich, the chief doctor at Charité’s obstetrics clinic. “We usually advise mothers carrying a child with an estimated weight of more than 4.5 kilos to opt for a caesarean section to avoid complications.”

The boy will join nine brothers and four sisters – four of which had birth weights of more than five kilograms.

The woman claimed she didn’t know of her diabetes, but doctors believe she was aware and ate too much sweet food.

A normal birth weight is about 3.5 kilos. Babies over four kilos – about one in ten in Germany – are generally considered to be overweight and run higher risks of diabetes and obesity later in life.

But the new Berlin boy is far from the biggest baby ever. An Indonesian woman gave birth to an 8.7-kilo child in 2009, and one Canadian baby born in 1879 weighed in at 10.8 kilos, although he died shortly after birth.