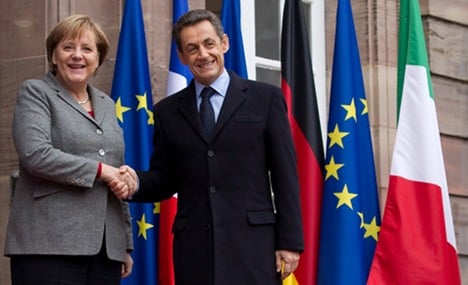 “The French president has just underlined the European Central Bank is

independent,” Merkel told reporters at a joint news conference with President Nicolas Sarkozy of France and Prime Minister Mario Monti of Italy in the French city of Strasbourg. “So the eventual modifications to the treaties will not concern the duties of the ECB, which concern monetary policy and monetary stability.”

Merkel and Sarkozy have said they want to modify European treaties to achieve a closer, more easily controlled fiscal union.

But many investors were hoping European governments would take a more direct role in the central bank to try to manage the continent’s long-running debt crisis. Markets tanked on news of the hands-off approach from the leaders.

Some elements in the French government have been calling for more control over the central bank, while the Germans have resisted the idea.

French ministers – and many other eurozone members – have said that, if the ECB were allowed to monetize sovereign debt, its almost unlimited resources would finally end market speculation about potential defaults.

The leaders promised to work to stabilize the euro before their next summit on December 9 to revise EU treaties.

France, Germany and Italy are determined to do everything possible to ensure the survival of the euro, French President Nicolas Sarkozy said, saying the leaders would “do everything to support and guarantee the euro’s durability.”

The goal of the Thursday meeting was to begin to “accelerate” the 17-nation bloc’s bid to calm bond markets by undertaking reforms of its financial governance, as the crisis threatens to spread to Spain and the eurozone core.

Germany, still seen as the strongest eurozone economy, has so far escaped the fury of the markets but its long term economic health depends on its EU trading partners reducing their deficits and stabilizing the economy.