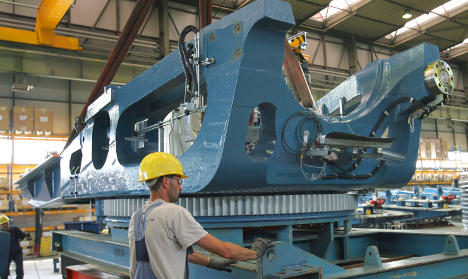 Markets soared as the Ifo economic institute’s closely watched business sentiment index rose to 106.6 in November, compared to 106.4 in October, the first rise in four months and contrary to analysts’ expectations.

“The German economy is still performing relatively well despite the international turmoil,” said the president of the institute, Hans-Werner Sinn.

The rise completely wrong-footed analysts surveyed by Dow Jones Newswires, who had predicted a decline to 105.1.

Traders were quick to cheer a rare slice of good news, with the DAX index of leading German shares jumping nearly 50 points and the euro gaining nearly half a cent against the dollar.

The index “improved somewhat in November for the first time in four months. The slight increase is due to somewhat less sceptical business expectations,” said Sinn.

“The current business situation, according to the survey responses, remains positive,” added the economist.

A weak German bond sale on Wednesday had stoked concerns that the eurozone debt crisis was seeping from the weak countries on the periphery of the bloc to the core, thought until recently to be safe.

Germany suffered the unusual humiliation of very weak demand at an auction for its bonds, until now considered the gold standard for eurozone debt and a safe haven against the crisis.

But analyst Carsten Brzeski from ING bank said that despite the poor bond auction, Germany was still standing up well to the crisis.

After the sale, “some market participants had already welcomed Germany in the debt crisis club,” he said.

“The lack of investor’s appetite for German government bonds was by some market participants even considered as a vote of no confidence against Germany. Time to put things into perspective,” he added.

However, a more bearish analyst, Jonathan Loynes from Capital Economics, believed the index would “do little to ease the growing concerns over the outlook for Germany in the wake of yesterday’s unsuccessful Bund auction.

“Overall, with the economy clearly slowing and the government under ever increasing pressure to take on enormous fiscal risk in order to save the euro, market worries about Germany look set to intensify,” he said.

The data confirmed that Germany outperformed its neighbours during the three months ending September 30. However economists see signs of a looming slowdown in the fourth quarter as the eurozone debt crisis takes a toll.

Germany suffered more than most from the last economic slump, with its economy shrinking around five percent in 2009 as demand for its exports dried up.

But as the developing world recovered quickly and began again buying goods “made in Germany”, the country staged an impressive comeback, with output growth of 3.7 percent last year.