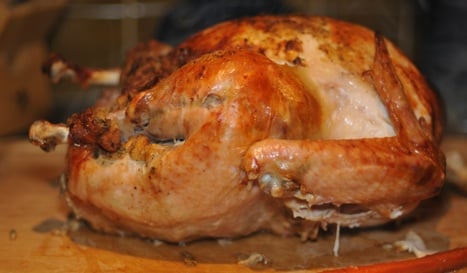 “So what exactly are we celebrating?” asked one German friend at the first Thanksgiving dinner that I prepared in Germany, five years ago.

It all started innocently enough, with 12 Germans and an American friend visiting from New York. We tracked down a turkey, mashed potatoes and improvised a few other side dishes. The following year, I had four-month old twins, 20 people in my living room and my American friend came back with her boyfriend to help with the spread.

Every year thereafter, the total number of celebrants increased tenfold which meant we moved furniture out of the living room, choked the hallway with a buffet table and directed intrepid amateur cooks to painstakingly follow the recipes as instructed. There would be no Rotkohl or Knödel on my Thanksgiving table but rather traditional holiday dishes that my German friends, many of whom chalked American cuisine up to burgers and thick-crust pizzas, had never seen before: stuffing, cranberry sauce, maple glazed carrots, sweet potatoes topped with marshmallows, green bean casserole and pecan pie.

This year, the kitchen staff will be buffered by 12 American friends who are flying in from New York, London, The Hague, Paris, Vietnam and Kyrgyzstan. Two neighbours in the building have opened guest rooms and their kitchens for the endeavour and we will be stuffing their ovens with two seven-kilo turkeys.

“But what’s this really all about?” my German friend persisted. For many Americans, Thanksgiving is about family, a shared feast and the US version of football. But what my friend actually wanted to know was the holiday’s origins.

While different theories exist, some historians recognize the “first” Thanksgiving as a celebration following the pilgrims’ successful corn harvest under the tutelage of the Native Americans in what is now Massachusetts in 1621. As an elementary student, my classmates and I drew pictures depicting a harmonious union, new neighbours and friends, shaking hands and passing a drumstick. Unfortunately, the Native Americans couldn’t foresee how later white settlers would repay their gracious hospitality.

But for me, Thanksgiving is not as much about US history as it is about my own. I am an unapologetic traditionalist when it comes to holiday rituals. And if anything, living abroad has reinforced this. These rituals are not about obligation but identity. Serving this meal to friends in Hamburg is a way to feel connected to my home, my childhood and my family. There is something comforting in knowing that although we are several thousand miles apart, we’re all doing the same thing – worrying about whether the bird is going to be too dry, fighting over who gets the wishbone, gloating over graduating from the kids’ table.

Becoming a mother has made the performance of these rituals more important because I know how they shaped my childhood, bookended my own personal narrative, and I want to create these traditions in the same way for my children. And while I carve out a few new traditions of my own, there is one ritual that has become institutionalized over these last five years: something that has come to be known as “Dankbarzeit.”

Perhaps because the German language has an affinity for distilling an entire concept down to one word, I thought Dankbarzeit was a legitimate way to express “a time to be thankful.” Only years later did I discover I had coined my own German term.

It’s a family tradition that not all but many American families uphold: at some point before or after the meal, we would go around the table listing one thing we were thankful for that year. At our house, this came right as the tryptophan coma was setting in and just before the pumpkin and pecan pies were set out. As a kid, I was thankful for tangible things: a new toy, a good grade, my best friend. As an adult, I tend to be thankful for more abstract concepts: community, health, love.

“O Gott, wie peinlich,” I heard a few German guests whisper under their breath when I first announced what they had to do in order to get dessert. In fact, one friend even ducked out and hid in the bathroom to avoid it. Germans, I was told later by a friend, especially northern Germans, do not appreciate being forced to get personal in front of strangers.

The very first year, our friend Kai started by giving thanks for the UN report on climate control. Fair enough, I thought. But as we went around the circle, things got more intimate.

Martin gave thanks for the amazing woman sitting next to him who he just married. Daniel and Iris, a couple who recently met and fell head over heels, gushed with gratitude for having finally met the right person. Over the next few years there were several proclamations of love and the corresponding thanks given for husbands and wives, for new babies and new jobs. There was also gratitude for the support of family and friends after the loss of a child, a parent, the weathering of a difficult year. At times the room rolled with laughter and other times we choked back tears, but by the end of Dankbarzeit, everyone felt a little less like strangers and a lot more thankful.

Whether they love it or hate it, Dankbarzeit has even become a real German word for our guests. It’s also become a tradition that they have come to think of as the true meaning of Thanksgiving.