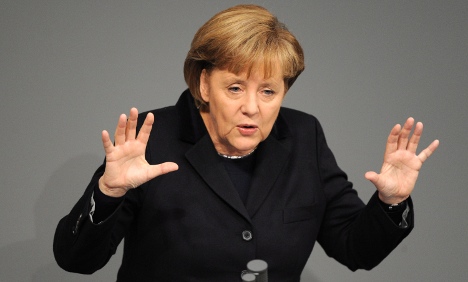 In a wide-ranging speech in the Bundestag lower house of parliament, Merkel said: “The Greek question has still not been cleared up because we have not seen the criteria met for the payment of the next tranche” of bailout loans.

Greece needs an €8-billion ($11-billion) pay-out by December 15 to avoid bankruptcy but the conservative group in the three-party unity government has refused to sign a reform pledge the EU says is needed for the funds.

“We need not only the signature of the Greek prime minister, but also the signatures of the parties that have formed a government in Greece, otherwise there can be no payment of the next tranche,” said the chancellor.

And Merkel persisted with her firm veto on allowing the ECB to step up its purchase of the bonds of distressed eurozone nations, insisting on the independence of the central bank and its sole mandate – to fight inflation.

“The economic and monetary union is based on a central bank which has as its sole responsibility the maintaining of price stability,” stressed Merkel. “That is its mandate, it is carrying it out … and I am firmly of the opinion that this mandate should not, absolutely not, be changed,” added the chancellor to loud applause.

Merkel also took aim at the European Commission, which is preparing to launch proposals for eurobonds, which many believe could be an effective response to the eurozone debt crisis.

She said she found it “extremely worrying” and “inappropriate” that Brussels was publishing its eurobond proposal as if what she called the weaknesses of the eurozone framework could be solved by pooling eurozone debt.

“This will not work,” she said.

Later Wednesday, Commission President Jose Manuel Barroso will unveil a radical set of reforms designed to toughen the policing of member states’ budgets, laying the ground for the potential introduction of eurobonds.

However, Germany fears its ultra-low borrowing costs would rise sharply if its debt were pooled with other, less fiscally solid countries such as Italy, Spain and Greece.

But investors shunned Wednesday an issue of German 10-year bonds, considered the gold standard of eurozone debt, as the crisis continued to simmer.

Germany received bids for only €3.9 billion of its 10-year Bund, despite offering €6 billion, in what the German Finance Agency called a “reflection of the extraordinarily nervous market conditions.”

“It doesn’t mean any refinancing bottleneck for the budget,” insisted Jörg Müller, a finance agency spokesman.

However, analysts worried that the eurozone debt crisis was beginning to slip into the very core of the 17-nation zone, as the euro dropped sharply on the foreign exchange markets after the auction.

“There’s been a lot of talk lately that perhaps Germany isn’t the safe-haven that many people thought it was,” said UBS currency strategist Chris Walker.

Danske Bank chief analyst Jens Peter Sorensen said the auction “reflects the deep mistrust to the euro project rather than a mistrust to German government bonds.”

He said: “As some investors say regarding the euro project – ‘if it is broke, then fix it’.”

At VTB capital in London, economist Neil MacKinnon commented that in the “latest bad news for the eurozone … Germany fails to get bids for 35 percent of 10-year bonds at this morning’s auction.”

He also noted from a document on the website of the European Central Bank that “the ECB is to lend $552 million to two un-named eurozone banks in a 6-day tender: the crisis is getting worse.”