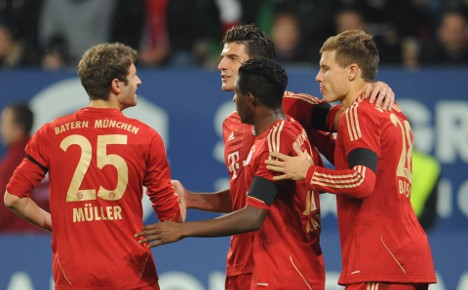 Bayern are three points clear of Manchester City at the top of Group A, with Villarreal bottom of the table after four defeats. The best the Spaniards can now hope for is to finish third and qualify for the Europa League.

Victory on Tuesday will put Bayern in the last 16, and if City fail to beat Napoli, the Germans will be sure to finish as group winners.

But Bayern’s form has dropped recently. Despite having won 13 games consecutively up until the end of October, Bayern have struggled since losing star midfielder Bastian Schweinsteiger to a broken collarbone at the start of November.

They then laboured to a 2-1 victory over the Bundesliga’s bottom side Augsburg, thanks mainly to fantastic performance from goalkeeper Manuel Neuer. They then lost 1-0 at home to defending champions Borussia Dortmund on Saturday.

“We really miss Bastian, that is beyond question,” admitted Bayern captain Philipp Lahm. “We miss his experience, his passing game and his presence.”

After seven weeks out with a groin strain at the start of October, Dutch winger Arjen Robben was rushed back to face Dortmund. He managed just over 70 minutes, and could well find himself involved against Villarreal, either off the bench or starting.

“There is no reason to panic,” said Robben after the Dortmund defeat.

Villarreal warmed up for Tuesday’s clash with a 1-0 win at home to Real Betis on Saturday which leaves them 10th in the Spanish league.

Coach Juan Carlos Garrido had six players missing for the win over Betis and captain Gonzalo Rodriguez says his team are coming to Munich to try to upset their hosts with the aim of finishing third in the table.

“So far, we have been able to recover from the setbacks we have suffered, but the truth is there have been many,” said the defender.

“Now we have to think of Munich and cling to the hope of continuing in the Europa League, but it will not be easy and we have to work hard.”