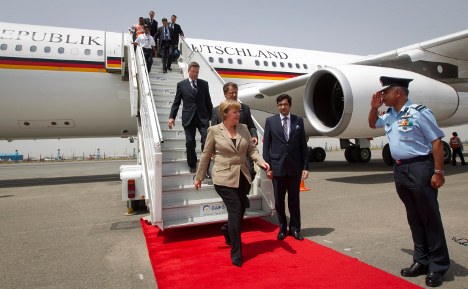 The Airbus 310 was delivered to Tehran from Kyiv, Ukraine on November 18, having been sold on by a group of eastern European investors. The plane was part of Germany’s “Air Force One” fleet for 20 years, and was used by various chancellors, foreign ministers and cabinet ministers throughout that time.

The plane, built in 1989 and once named “Theodor Heuss” after the first president of the Federal Republic of Germany, was originally part of the fleet of East German airline Interflug, and was last used by the German government in June.

After its retirement from government service, the plane was handed over to the collection company for federal ownership Vebeg. The company made a catalogue profile of the Theodor Heuss, which showed pictures of the plane with the national colours still painted on its flanks.

When Vebeg sold the plane to a group of eastern European investors for €3,125,000, the buyers had apparently not yet decided on the plane’s end use. A government spokesman told news magazine Der Spiegel that the plane was painted in neutral colours by the time of its sale.

The investors have now quietly sold the plane on the Mahan Air, leading many industry insiders to speculate that they were a front for the Iranians all along. Several Lufthansa Airbus planes have been sold to Iran via Kyiv in the past, bypassing trade sanctions.