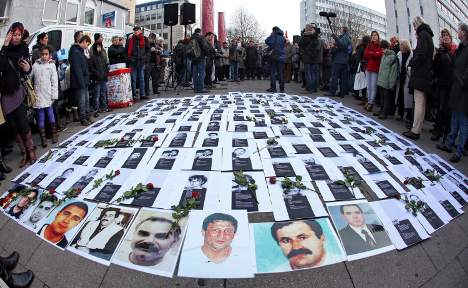 The Bundestag lower house of parliament has held talks with Chancellor Angela Merkel and German President Christian Wulff over the most appropriate way to remember the murder victims, parliament chief Norbert Lammert said.

“We are all agreed that there should be an event,” he told the Tagesspiegel Sunday edition.

“How such a commemoration should take place depends on the views and expectations of the victims’ families,” he added.

Germany is reeling after the recent discovery of a small far-right group believed to be responsible for the unsolved murders of eight men of Turkish origin and a Greek between 2000 and 2006 as well as a policewoman in 2007.

Justice Minister Sabine Leutheusser-Schnarrenberger promised compensation to loved ones and said she was concerned that a probe into neo-Nazi violence might reveal more crimes.

“I fear that at the end of the investigation, we will uncover more victims of xenophobia than we are aware of today,” the minister told the Welt am Sonntag newspaper.

“Even if financial help cannot undo the suffering, I will attempt to give the victims’ families a sign of our solidarity with compensation from my budget,” Leutheusser-Schnarrenberger said.

The murders have reheated the debate in Germany as to whether to ban the far-right NPD party.

Lammert said that authorities should examine any possible links between the cell and the NPD but appeared sceptical as to the effectiveness of a ban.

“We should not be under the illusion that banning the NPD would dispel far-right attitudes,” he said.

Yet a survey published on Sunday showed that 70 percent of those questioned would support banning the controversial party, which has elected representatives in the state parliaments of Saxony and Mecklenburg-Western Pomerania.

The poll, conducted by Emnid for the Bild am Sonntag newspaper, showed that 22 percent did not agree with the idea of banning the party.

A group demonstrated for an NPD ban in Munich on Saturday, carrying photographs of some of the victims of the terror group.

Banning a political party is a complicated matter in Germany – it is a procedure for the Constitutional Court.

An attempt to ban the NPD in 2003 failed due to the presence of intelligence agency informants at the top of some sections of the party and some fear this could be repeated.

Chairman of the parliamentary committee on domestic affairs, Wolfgang Bosbach told the paper, “Who will guarantee us that a new ban application will be successful? Another failure would be a great success for the NPD and a huge embarrassment for the state.”