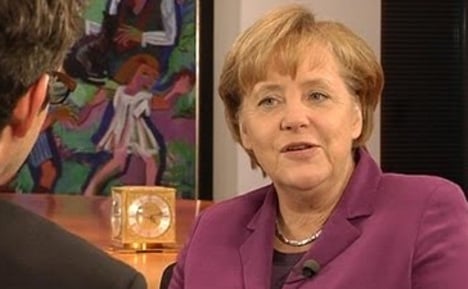 But viewers keen to see what Merkel had to say about making joints legal will have to wait – she is answering the ten most popular questions in reverse order, over three sessions.

Thus in Friday’s eight-minute broadcast she tackled the topics of MPs wages, pensions, healthcare options for high-earners and politicians’ motivations. The questions were posed in a semi-formal setting, by a young man in a suit, although no tie.

The first question about why politicians and civil servants were not included in the statutory health care system, although they are responsible for it, she answered with details of how the system works, although did not directly respond to the query.

The second question was why MPs set their own wages. She said that MPs think carefully about their wages, but decided to set their pay at the same level as mayors of mid-sized towns.

When asked about the other activities of MPs, with the suggestion that they were little more than lobbyists, she said there were some advantages to having MPs with different experiences and that they were transparent about who was doing what.

“I became a politician from passion, and find the questions interesting. That is why I always make an effort to answer truthfully and give the level of answer users are expecting.”

More than 1,700 questions were submitted by the public after it was announced that Merkel was going to offer videoed answers. YouTube users then voted for which questions they most urgently wanted her to address – with the matter of cannabis legalisation taking the top spot.

Episodes two and three, set for broadcast on Monday and November 31, the questions will broaden out into topics such as the legalization of cannabis and political bribery.

The video had been viewed more than 19,000 times by Saturday afternoon.