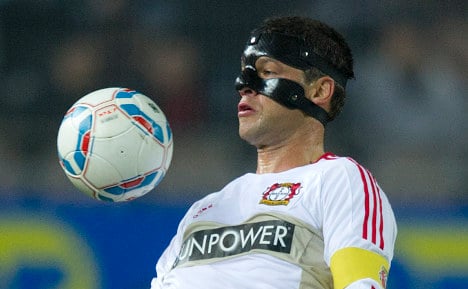 Despite playing in a mask to protect a broken bone in his nose, Ballack scored one of his team’s two goals against Kaiserslautern, opening up a lead which was increased later in the match by Sidney Sam’s goal, to wrap up a 2-0 victory.

“Michael has been improving his performance for months. He is living out his determination for success. He is in very good form, very present and involved in many goal-threatening situations,” said Robin Dutt, Leverkusen’s trainer.

After suffering the knock of being dropped from the national team after playing for his country 98 times, Ballack seems to be entering a career autumn that is golden, seen by many as the head and the heart of the Leverkusen team.

Even his criticism is welcomed – after saying the players were being given too easy a time, he said, “I hope that didn’t come over well. We need exactly that – discussion, different opinions and attitudes. Only then can you improve. It doesn’t help if everyone has the same opinion.”

And Dutt agreed, practically giving Ballack a license to do what he wanted. “He is such an experienced player that he can talk about things from his point of view. I have absolutely no problem with that,” said the trainer.

Yet even though Ballack’s role in the team is treasured, it is expected that he will leave at the end of the season.

“It has to make sense for both sides. At the moment we are assuming that it will be over in the summer,” said Leverkusen sports director Rudi Völler.

Ballack himself has yet to be clear on what he is planning to do. “I have some complicated months behind me,” he said.

“It is normal when one is 35 and the contract runs out, that you have a think. That doesn’t mean that it necessarily has to be the end of the Bundesliga, but one has to accept that this could be the case.”

At the moment he is consciously enjoying his time on the pitch. “I sucked up the atmosphere today. When one is in the autumn of ones career, one particularly enjoys it,” he said.