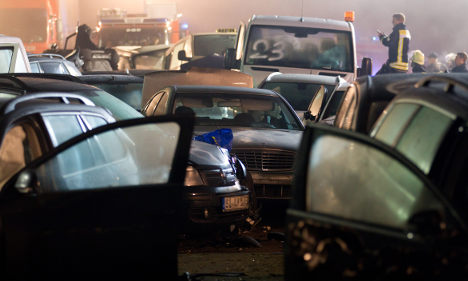 “It was a scene of devastation,” a police spokeswoman said of the pile-up which happened in thick fog.

A woman and two men were killed, while at least 35 people were injured, 14 seriously. Six children were also injured, the youngest of whom was just six months old, although the baby was only slightly hurt.

The pile-up happened at around 7:15 pm on the A31 between Heek and Gronau-Ochtrup, among traffic travelling towards Emden. Smashed cars and trucks covered the motorway for several hundred metres.

Rescue services from across the region were rushed to the site, with at least 100 police, fire fighters and medical personnel working through the vehicles to get everyone out and deliver first aid before the injured were taken to nearby hospitals.

A police spokesman said on Friday night it was too early to guess at whether the fog alone caused the accident or if people were also driving too fast.

Five more people were killed in the early hours of Saturday when two cars collided near Aachen on the B258 trunk road.

He said it was thought that the 24-year-old driver of one car lost control over his vehicle and swerved into oncoming traffic, hitting another car head-on.

The 47-year-old driver and his 45-year-old female passenger of the oncoming car were killed, while a 32-year-old in their vehicle was seriously hurt.

Counsellors were called to the scene to help witnesses who were devastated by what they saw.