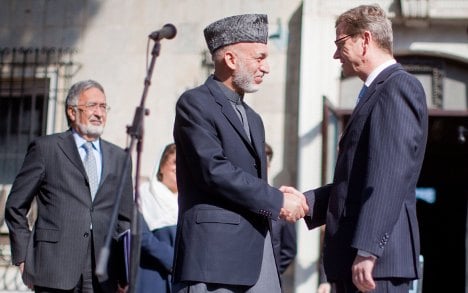 The Bonn conference on December 5 will discuss Afghanistan’s future beyond 2014, when NATO-led international combat troops will leave, and comes ten years after a previous landmark meeting on Afghanistan in the German city.

He added that Afghanistan had already presented Germany with a document outlining how it saw its “long-term partnership with the international community and their mutual obligations”.

More than 90 delegations from around the world are expected to gather in Bonn next month.

NATO-led combat troops are scheduled to withdraw from Afghanistan by the end of 2014, and the Afghan government is set to take full responsibility for security.

There are currently 140,000 international forces in the country, mostly from the United States.

The Bonn conference is expected to discuss the transition, stalled efforts to reconcile with the Taliban, and regional and international involvement in Afghanistan after 2014.

Westerwelle also visited Afghanistan’s neighbour Pakistan on Friday ahead of the event.

Afghanistan and the United States have often accused elements in Pakistan of supporting the Afghan Taliban as a means of offsetting the growing power of its arch-rival India.

Westerwelle said the signal must come from Bonn that Afghanistan would not be forgotten after 2014 – and that this was in the interests of the current allies with troops there. The country must not revert to being a retreat for terrorist, he said.