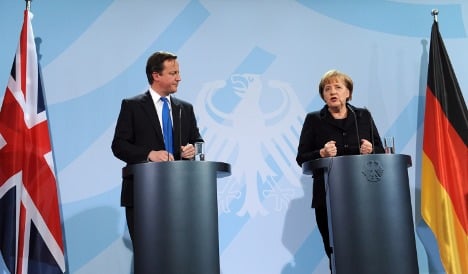 After tensions flared in the run up to their talks in Berlin, the two conservative leaders tried to paper over their differences but failed to make headway on crucial issues such as the role of the European Central Bank (ECB).

Cameron renewed his appeal for all eurozone institutions to do their utmost to rescue the common currency, in response to a question about his call for the ECB to be used as a “big bazooka” to defend the euro.

“As we agreed at the G20, all the institutions of the eurozone have to stand behind and back the currency and do what’s necessary to defend it – that is what needs to happen,” Cameron told a joint press conference.

But Merkel underlined her opposition to the ECB buying up bonds on a major scale and becoming the lender of last resort to debt-mired countries.

“You have to be careful not to pretend to have powers that you do not,” she said, following remarks she made this week that the ECB would not have the right to take such action under the existing rules. The markets will catch on quickly that that will not work.”

New ECB chief Mario Draghi also brushed off the political pressure on Friday, saying the bank’s overriding task was to safeguard price stability and stressing that governments had to get their finances in order to buck the crisis.

Cameron and Merkel also differed on the prospect of a financial transaction tax (FTT), which Cameron reiterated that Britain could only accept if it were introduced globally. The City of London fears such a tax would scare off investors.

Merkel has said she would be willing to press forward on the tax in the 17-member eurozone alone if the 27 EU members could not agree on it. Britain belongs to the EU but not the eurozone.

“Both our countries would introduce (the FTT) immediately on a global level but we did not make any progress on the European level,” she said.

Cameron nevertheless stressed his confidence in the eurozone’s ability to find its way out of the debt crisis and said Britain had a key stake in the euro’s success.

“This is obviously a difficult time – you can see that in the markets – but I don’t underestimate for a minute the commitment of countries like Germany and those in the eurozone, to make the currency work,” he said.

Merkel also turned on the charm after a trying week, saying that she was confident they would strike a compromise.

“Whenever David and I work together on a problem, we have always found a solution,” she said.

Merkel’s parliamentary party leader Volker Kauder had upset certain sections of the British eurosceptic press ahead of the meeting by calling for the UK to play its part in rescuing the euro – and saying Europe was “speaking German” in its joint determination to solve the problem.

Her Finance Minister Wolfgang Schäuble managed to add introduce further piquancy to the meeting by suggesting that eventually all European countries including the UK would join the euro. “It will perhaps go faster than some on the British Isles believe,” he said.

At the end of the Friday press conference, the pair addressed the language issue – even if they refused to touch the idea of Britain adopting the euro.

Merkel told the journalists she wanted to improve not only her Russian language skills but also her English, but then added that both she and Cameron were speaking “the language of Europe.”