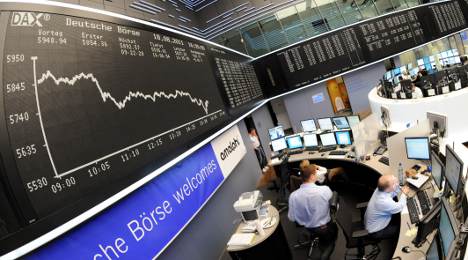 “NYSE Euronext and Deutsche Börse today confirm that they have submitted a remedy proposal to the European Commission… to divest the portions of their respective businesses in which they overlap,” the two groups said in a joint statement.

NYSE Euronext would “divest its pan-European single equity derivatives business, including Bclear, except the options businesses in its home markets, where Deutsche Börse would divest its respective business,” the statement said.

Adding that the proposal was designed to address the Commission’s remaining concerns in derivatives trading and clearing and would “eliminate the existing overlap in European single equity derivatives.”

With regard to the planned joint clearing house for European interest rate and equity index derivatives, the operators of the Frankfurt and New York stock exchanges pledged to “grant unprecedented third-party access to Eurex Clearing.

“The clearing services would be provided on a fair, reasonable and non-discriminatory basis,” they promised.

The proposed tie-up has already been approved by Deutsche Börse’s and NYSE Euronext’s respective shareholders, but has yet to receive the green light from regulatory authorities in the United States and Europe.

The two groups said that with the EU Commission “now set to complete its review by 23 January, 2012… the parties would anticipate closing shortly thereafter in early 2012.”

Deutsche Börse and NYSE Euronext said they “continue to believe that (their merger) will have no detrimental effect on competition, but rather will enhance it by delivering a regulated, stable and transparent European counterweight to established market centres in America and Asia and delivering significant efficiencies to users of our markets.”

In the US, the proposed merger has sparked controversy because it would hand over the 221-year-old New York Stock Exchange to foreign owners.

Deutsche Börse shareholders are to own 60 percent of the new combined, Netherlands-incorporated firm, and the German company will dominate the new board.