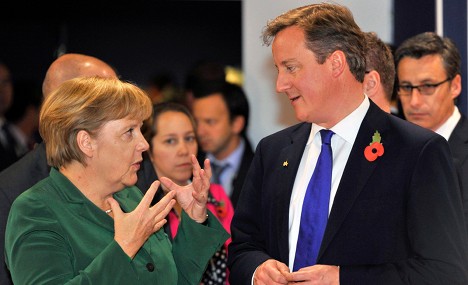 Merkel and Cameron, who will arrive after talks with EU leaders in Brussels, have clashed recently on the way forward for Europe as it suffers what she has called perhaps its most difficult hour since World War II.

While Merkel sees “more Europe” as the solution, with member states agreeing to cede more sovereignty on issues such as fiscal policy, Cameron has taken a hard eurosceptic line of late in response to domestic pressure.

He had previously been at pains to justify support for the eurozone on the grounds that it is Britain’s biggest trading partner, but that argument has notably slipped from view.

Cameron lashed out this week against “grand plans and utopian visions” and called for an EU with “the flexibility of a network, not the rigidity of a bloc”. He has also evoked using the crisis to claw back powers from Brussels.

German commentators have fretted about the anti-Europe mood in London and said Cameron appeared to be seeking a scapegoat for troubling economic data seen this week including a record one million young people out of work.

“The atmosphere between the two countries is currently frostier than it has been in a long time,” the centre-left daily Süddeutsche Zeitung wrote on Thursday.

“With his speech he has positioned himself firmly against Merkel, who is calling for more Europe. In Berlin this development is being viewed with concern,” it said.

Germany would like to see Britain, which is not a member of the eurozone, do more to help resolve the debt crisis such as support a financial transaction tax, which the City of London fears would scare off investors.

However Merkel grudgingly conceded this week that Berlin would move forward with the tax in the 17-nation eurozone alone if need be.

Meanwhile the combative parliamentary group leader of Merkel’s Christian Democratic Union party, Volker Kauder, ruffled feathers this week with a call for Britain to “do its part” in rescuing the euro.

He also staked a claim to Germany’s leadership in Europe, saying it was now “speaking German” which provoked howls of protest from some corners of the British press.

Cameron has for his part urged the European Central Bank to be used as a “big bazooka” to defend the euro by buying up bonds on a major scale and becoming the lender of last resort to debt-mired countries – moves Berlin strongly opposes.

“The front lines will be clear when Merkel meets Cameron – the old EU contrast between federalists and inter-governmentalists is emerging again in the crisis,” wrote the weekly Der Spiegel in its online edition.

“The Cameron government is facing a dilemma: it wants to maintain the greatest possible distance to the crisis on the continent, but it also wants to have a say, given that the crisis is changing the nature of the EU and Britain remains one of the big three in the Union.”

The opposing views could put the two camps on a collision course ahead of a December 9 EU summit to hammer out changes to the fiscal rule book for the 27-member bloc.