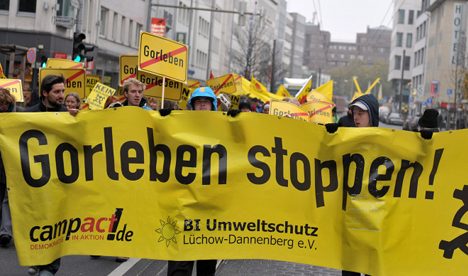 Thousands of demonstrators will descend upon the northern German state on November 26, when the waste in a so-called Castor container heads from the La Hague reprocessing plant to Germany’s nuclear waste depot in Gorleben.

Kerstin Rudek, the chairwoman of a citizens’ initiative in the surrounding Lüchow-Dannenberg district has said the protests would be peaceful.

Nevertheless, police are expecting a hard core of 300 protesters to attempt to disrupt the rail transport, in what has become a regular game of cat and mouse between authorities and anti-nuclear activists who try to block the waste shipments.

The protests revolve largely around the future of the Gorleben depot, which is supposed to be a temporary repository for nuclear waste while German officials decide whether it’s fit to become a permanent storage site. Activists contend that the location is unsafe.

This year’s protests are expected to be particularly intense in light of the German government’s recent decision to phase out nuclear power after Japan’s Fukushima nuclear disaster and revelations that the nuclear industry attempted to influence public opinion before the 2009 elections through extensive lobbying activities.

Rudek said there would be “broad resistance from all age groups and social classes” including pensioners, farmers and children in a large demonstration of more than 10,000 people.

He said police would take swift action in the event of violence or attempts to disrupt the transport by, for instance, blocking rail tracks or attempted sabotage.

In previous years police have complained of staffing problems caused by the numbers needed to accompany the transports.

Last year massive protests temporarily delayed the arrival of nuclear waste in Gorleben, with some activists even attempting to remove railway tracks.