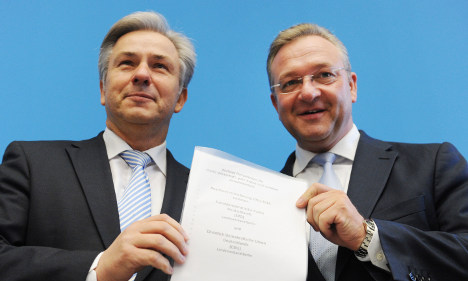 Wowereit, who has been Berlin mayor for a decade, will remain in office, while it has been agreed that each party will take four of the eight ministries.

Decisions over who will actually staff the senator positions have not yet been made. Wowereit’s confirmation as mayor is expected on November 24, while the senators will be named a few days later.

Policies on which the parties had disagreed have been settled, including the SPD’s wish to introduce a tourism tax of five percent of their hotel bill from 2013, and to raise the minimum wage for public contract jobs from €7.50 to €8.50 an hour, as well as abandoning attempts to make teachers civil servants rather than regular employees.

The CDU managed to get agreement that a law which envisaged property owners being forced to contribute to the costs of street improvements, would be ditched.

The coalition is the start of a new era for Berlin, which has been governed by Wowereit for the last decade, latterly in coalition with the socialist Left party until the most recent state election in September.

After the vote, Wowereit had been expected to form a coalition with the environmentalist Greens, but early negotiations collapsed over the extension of a city motorway. That paved the way for talks with the CDU.

Wowereit was the big political winner from the 2001 collapse of the last SPD-CDU coalition which had horribly mis-managed the city’s finances and was engulfed in a bank scandal.

The new “grand coalition” at Berlin level will be seen by many as a possible signal for federal politics as Chancellor Angela Merkel’s CDU-led coalition is not expected to survive the national elections of 2013 – her junior government partner the Free Democratic Party faces electoral decimation, with poll ratings consistently around the two percent mark.