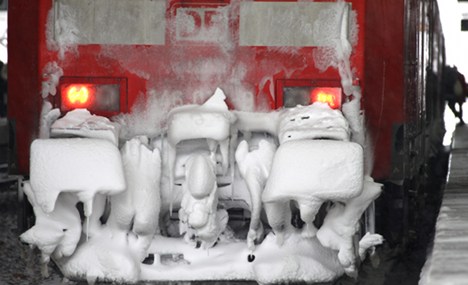 An internal plan seen by Bild newspaper, says that 16,000 staff members will be responsible for snow removal on station platforms this winter – a doubling of staff strength from last year. The investment is part of a €300 million cash injection over three years.

Deutsche Bahn intends to ensure train platforms are completely clear of snow at the beginning of daily operations and that “mission critical” equipment is operational within four to five hours of snow and ice.

Other enhancements include trimming trees and bushes along 2,000 kilometres of tracks so branches don’t fall and block trains and building nearly 30 new de-icing facilities, including equipment to de-ice overhead electrical lines which power trains.

The desperate hope is to avoid a repeat of Deutsche Bahn’s horrendous service failures last winter which left tens of thousands of Germans stranded or massively delayed.

The travails led to a special meeting between Deutsche Bahn and state transport ministers, where government leaders demanded better performance.

Deutsche Bahn boss Rüdiger Grube said at the meeting that the company had been investing billions of euros to improve the rail system but said unusually harsh conditions had resulted in “extreme strain.”

In September, the director of Deutsche Bahn’s regional operations, Frank Sennhenn, told the Tagesspiegel newspaper that travellers could expect some delays this winter because of a shortage of reserve trains.