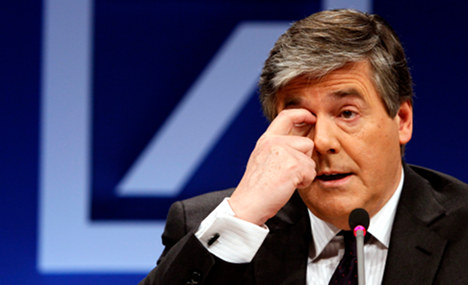 The money is being paid to the National Credit Union Administration and is supposed to help cover billions of dollars the federal organisation charged other credit unions for expenses related to liquidating failed credit unions in 2009 and 2010.

Citigroup also agreed to pay $20.5 million (€15 million) in the settlement deal. Despite the payments, both banks denied any wrongdoing.

The announcement comes at a sensitive time for Deutsche Bank, as its chief executive Josef Ackermann said on Monday he would not take a seat on the bank’s supervisory board next year as originally envisaged following his planned departure from the management board next year.

Ackermann cited the “extremely challenging conditions on the international financial markets and in the political-regulatory environment,” which demand his full attention as the current management board chair for the decision. He is slated to step down as CEO next May.

But also possibly playing into the decision may be a brewing investigation by Munich prosecutors over Ackermann’s testimony in a civil suit connected to the demise of the media group of the late Leo Kirch.

The offices of both Ackermann and ex-supervisory board chief Clemens Börsig, as well as the home of former Deutsche Bank CEO Rolf Breuer were searched as part of the investigation.

Deutsche Bank itself rejected the accusations and slammed the action by prosecutors as “disproportionate”.

“The bank is confident that, as in all previous proceedings in the Kirch case, the charges will be shown to be unfounded,” it said.

Kirch, who died earlier this year, sued Deutsche Bank a number of years ago, saying that the bank’s then CEO Breuer had questioned the creditworthiness of his media empire, ultimately leading to its collapse.