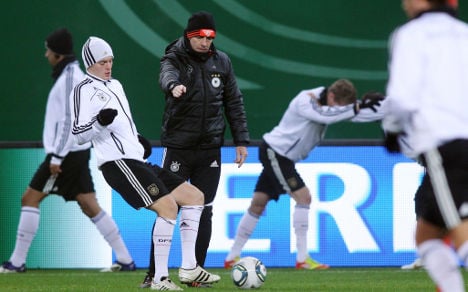 Löw and the team train on Monday. Photo: DPA

After winning all 10 of their Euro 2012 qualifiers and humbling Brazil in an August friendly, Löw is looking for Germany’s first win over the Dutch since 1996 in what will be his 75th international as national team coach.

Both sides are without key players with Germany captain Philipp Lahm being rested and Bayern Munich star midfielder Bastian Schweinsteiger missing with a broken collarbone.

Likewise, Dutch midfielder Rafael van der Vaart is out with a thigh strain while striker Robin van Persie has returned to his Premier League club Arsenal to be rested.

“We have no fear and there is no reason to be afraid,” said Löw told reporters on Monday.

“It will be a great challenge to play against the number two team in the world. I expect an aggressive and interesting game.”

While both teams are among the Euro 2012 favourites, they share a rich history with Germany racking up 13 wins to the Netherlands’ 10 and the sides drawing 14 times since their first encounter in 1910.

Their most explosive clash was in Milan at the 1990 World Cup when Germany beat the Netherlands 2-1 in a bad-tempered quarter-final.

Both Germany’s Rudi Völler and Holland’s Frank Rijkaard were sent off early in the match after the Dutchman infamously spat at the German midfielder.

A Dutch reporter at the pre-match press conference could not resist asking whether the match in Hamburg was a friendly game or a war between neighbours.

“It is a test game for both teams, this game has no influence on next year,” replied Löw diplomatically.

“Of course, we both want a win, we want to both show what we can do, but I don’t think it will come with an elevated level of aggression.”

Löw played an experimental three-man defence in Friday’s 3-3 draw with Ukraine in Kiev but is considering playing a traditional 4-4-2 formation against the Dutch.

Veteran Miroslav Klose, who is six goals short of Gerd Müller’s record as Germany’s all-time top scorer, trained on Sunday and Löw said he would decide on Monday night whether he will partner Mario Gomez up front.

The coach also said Hamburg’s Dennis Aogo would switch from defensive midfielder to left back while Özil would start.

The Dutch meanwhile are looking for a win in Hamburg after they were booed by their own fans after a goalless draw against Switzerland in Amsterdam on Friday.

“The Netherlands have mastered the system they play, they know exactly what to do and they are hard to beat,” said Löw.

“Their extra class is the strength they have shown over the years, they have individual players who have great speed, especially in one-to-one situations.”

Germany’s in-form striker Mario Gomez admitted on Monday that despite his present goal-scoring streak he still faced a battle with veteran Miroslav Klose to be their first choice striker at Euro 2012.

The 26-year-old Bayern Munich star – who was honoured by being made captain for last Friday’s friendly with Euro 2012 co-hosts Ukraine – also paid tribute to Germany coach Joachim Löw for his loyalty to him despite a poor start to his international career.

Gomez, who was dropped by Löw from the starting line-up after the pool matches at Euro 2008 and was second-choice behind Klose at last year’s World Cup finals, could well start up front with Klose for Tuesday’s attractive friendly with the Netherlands.

“It is still a fight between Miroslav and me, we both want the same place,” said Gomez.

“My task is to stay fit, keep my form and keep scoring goals. Then the national coach has to decide who is the best for the team. I am pleased that I am now an alternative to Miroslav.”