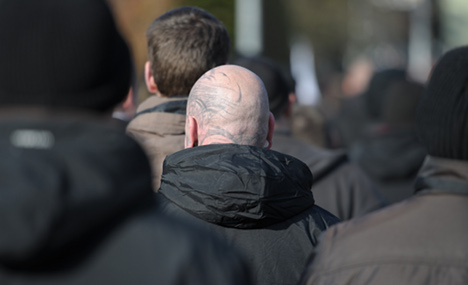 Interior Minister Hans-Peter Friedrich admitted gross failures by the security services after revelations of a decade-long killing spree by neo-Nazis.

“It is deeply troubling that there was no connection made between the murder series across Germany and the far-right scene in Thuringia,” the east German state where the trio was based, Friedrich told the daily Bild. “State interior ministers are calling for better coordination between police and domestic intelligence on the state level. I strongly back that.”

Friedrich said it was still unclear whether a group of extremists who admitted gunning down nine businessmen of foreign origin and a policewoman had a larger network behind them.

“The loved ones of the victims can be sure that (Germany) will do everything to get to the bottom of this affair,” Chancellor Angela Merkel told the ARD television network late on Sunday. At party conference on Monday she called the episode “shameful for Germany.”

Four suspects – two of whom killed themselves last week – are suspected of involvement in a series of killings, including foreign shopkeepers from 2000 to 2006 and a policewoman in 2007. The two living suspects have been arrested and are currently in police custody. They were all allegedly part of a subversive group called the National Socialist Underground (NSU).

There have been suggestions that the suspects had connections with domestic intelligence agencies and Thomas Oppermann, the head of the opposition Social Democrats’ parliamentary grouping, told the Bild newspaper he was seeking a special meeting of the parliamentary committee overseeing the secret services.

“I want to know what the authorities knew and how such criminal acts can better be prevented in future,” he told the paper.

Friedrich described the so-called “döner kebab murders,” as “new form of extreme-right terror” and said all unsolved crimes in Germany since 1998 suspected of being xenophobic should be reviewed to see whether they can be connected to the group.

Meanwhile Bavarian Interior Minister Joachim Herrmann called for officials to discuss how to ban the NPD, despite there being no apparent direct link between the suspects and the party.

“I am for setting the NPD ban back on the agenda,” Herrmann said.

Discussion of the issue comes at a critical time for the NPD, which over the weekend ousted long-time leader Udo Voigt from the party chairmanship. Instead, 40-year-old Holger Apfel, head of the party in the Saxony state legislature, has taken the reins of the party.

German authorities tried to ban the extreme-right party before but failed in 2003 when the Federal Constitutional Court determined that state-affiliated informants were playing major roles in the party’s leadership.

In order for a ban to be successful, the state would need to convince the court, which is the only body with the power to ban parties deemed unconstitutional.

The GdP police union said a ban could be helpful because it would prevent the party from openly organising congresses and strip it of its financial base.

But Cem Özdemir, the leader of the Green party in Germany played down the possibility of a ban, saying “we have to discuss how the NPD and right-wing extremists have become socially hegemonic, especially in the eastern part of our republic.”

The head of the Central Council of Muslims in Germany, Aiman Mazyek, said

the problem of far-right “terrorism” had been “chronically underestimated” in

Germany while the focus was on Islamic militants, in the daily Neue