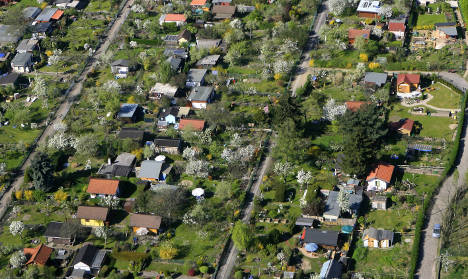 What began as a chance for a breath of fresh air amid the industrial revolution, became a crucial source of food during the war, and then sank into the lawn-measuring, neighbour-watching stereotype of recent decades, is once again attracting younger Germans.

More than five million green-thumbed enthusiasts tend an area the size of 60,000 football pitches in little plots across Germany. No longer the reserve of pensioners, these gardens are at the centre of a blooming ‘back to basics’ revolution.

Originally conceived as a way to help poorer citizens to obtain better nutrition and enjoy time outdoors in the 19th century, the concept of the allotment was pioneered by doctor Daniel Gottlob Moritz Schreber, after whom the German word of allotment – Schrebergarten – is named.

An average Schrebergarten measures 370 square metres, and there are approximately a million in Germany alone.

Despite being long dead, Schreber’s legacy is being upheld over a century later by people turning to the humble allotment patch for their slice of what has become increasingly difficult to find in the modern urban world – spiritual escapism in the open air.

The allotment is in the throes of a revival as city-dwellers are rushing to get their hands dirty planting fruit and veg. And in areas such as Berlin-Charlottenburg, waiting lists are grazing the four year mark.

Munich sociologist Christa Müller describes the Schrebergarten as becoming especially popular with “young people who, up until now, haven’t learnt to do much with their hands other than use a keyboard, but are putting increasing worth on society and friendship than on the abstract worth of money.”

It is, however, not only the young professional crowd who are clamouring for a Schrebergarten; in recent years young families have snapped up almost half of the many newly built plots.

Berlin culture sociologist Elisabeth Meyer-Renschausen links this to the trend for organic food and the increasing importance placed upon people knowing where what they are eating comes from.

“There are parents who want to pick berries for their children to show them where their food comes from” she said.

Thomas Wagner of the national society of garden lovers – Bundesverband der Gartenfreunde (BDG) – said the broadening appeal of allotments is a sign of other positive changes.

“The “I want everything and I want it now” attitude is fading, and more people are choosing to embrace a simpler lifestyle,” he said.

Adding that, “this is evident not only in craze for vintage clothing and household items, but in the countless cooking programmes on television.”

Wagner feels that having an allotment fits into the idea of a simpler lifestyle well “because it embodies escapism, happiness and peace. People can take the time to step back and take stock of themselves on their own little patch of countryside.”

Müller sees allotments as part of a larger craze for urban gardening sweeping over German cities, where community gardens, balconies decked out in plants and even small herb gardens on the pavement are now the norm.

“Public space belongs to us,” she said. “We will decide how it looks”.

And of course German bureaucracy has a branched out into the gardens – the ‘national small garden law’ passed in 1983 obliges Schrebergarten owners to ensure that their plot is one third planting area, one third lawn and one third recreational space.

So, for those who decide to take the leap into the leafy and invest in a Schrebergarten, certain elements must be taken into consideration. An allotment may not be used as a purely recreational area, meaning that owners have to actively grow produce on it. Also, hedges must not supersede a certain height.

Prices for allotments, however, have remained steady over the past years as owners purposefully keep prices reasonable when selling one. Depending on how the plot is kitted out, and where it is, prices remain between €1,000 in the countryside and €7,000 in urban areas.