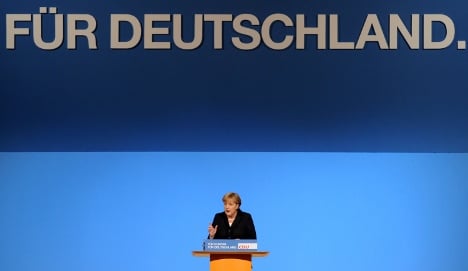 Merkel told around 1,000 of her conservative Christian Democrats (CDU) at a party conference in the eastern city of Leipzig that if Europe did not flourish, Germany would also suffer.

“We need Europe because it is the basis of our well-being. Sixty percent of our exports go to the European Union, nine million jobs alone depend on it,” Merkel said.

As Europe battles its debt crisis, she added however that: “Europe is today… perhaps in its hardest hour since the Second World War.”

But she said just as Germany had vowed to emerge stronger from the 2008 financial crisis, “now we must see to it that Europe comes out of today’s crisis stronger.”

Germany has seen mounting ire at having to pay the lion’s share of Europe’s debt crisis bailout.

As the world’s number two exporter after China, Germany is Europe’s biggest economy and the paymaster for the eurozone’s rescue fund, which has already helped bail out Greece, Ireland and Portugal.

But as anger simmers at Berlin shouldering the biggest burden, members of Merkel’s Christian Democratic Union are putting forward a resolution at the congress to allow for struggling countries to exit the eurozone without leaving the EU.

Germany’s news weekly Der Spiegel said in its online edition that it was “remarkable” that the CDU, which has always been the “Europe party”, was officially discussing the possible euro exit of some states. Delegates are also expected to face a motion on overhauling the balance of power within the European Central Bank to give Germany a greater say.

The Frankfurt-based central bank’s independence is a thorny issue in Germany, still haunted by the hyper-inflation of the 1920s and fearful of seeing it transformed into a money-printing machine.

Some CDU members want votes at the ECB’s policy-setting governing council to be weighted according to a country’s economic size and importance, rather than each of the 17 eurozone members having an equal say, as is currently the case meaning Germany has no more weight than tiny Malta.

A poll for public broadcaster ZDF released Friday suggested that Merkel’s approval rating in her handling of the euro crisis had risen to 56 percent from 45 percent at the beginning of October.

A call for a minimum wage in sectors without one is also expected to focus minds at the Leipzig congress, in a major shift to the centre for Merkel’s party after earlier about-faces on nuclear energy and army conscription.

“The times are changing and therefore the answers must also change from the (conservative) compass. The decisions from 60 years ago are different to those of today,” Merkel, chancellor since 2005, said on ARD television late Sunday.

The Welt am Sonntag saw the move, together with several other policy changes, as an attempt by Merkel to eye a possible future tie-up with the opposition Social Democrats or the Greens after the 2013 general election.

But Monday’s Süddeutsche Zeitung commented that Merkel was stuck in a “sandwich position” that could make it difficult to see through the policies. “Not only the seniors (in the party), also the youths in the CDU represent clearly more conservative positions,” it said.