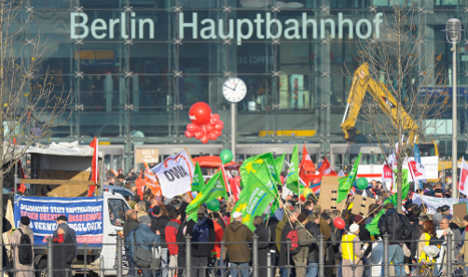 More than 1,000 protesters gathered at 12.30 p.m. at Berlin’s Central Station to form a human chain around the government quarter. Blowing whistles and beating drums, many also carried placards with slogans such as “Real Democracy Now” and “The World is not Product.”

The action was coordinated by several groups, including the anti-globalization group Attac, and supported by labour unions and non-governmental organisations. Occupy activists who have been camped out for days next to the Chancellery and Reichstag also joined in with the protest action.

According to the organizers, many people cannot accept that “billions of euros are being spent on bailing out the banks without them having a say.” Instead the “big banks should be broken up, non-transparent financial products banned, a financial transaction tax introduced and assets should finally be taxed.”

Organizers said they planned to complete the 3.5 kilometre human chain during the afternoon and then march to the Brandenburg Gate.