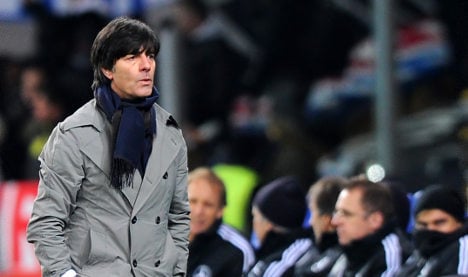 An experimental German team survived a scare on Friday as the guests had to come from 3-1 down to seal the draw. Löw has said his team must be better in Hamburg against the Dutch.

“I am taking a lot of positives from this and I reserve the right to experiment at this stage of our preparations,” said Löw defiantly after his side were the first to book their Euro 2012 place from the qualification groups.

“We had an awful lot dominance in the game, hence I am not dissatisfied. Of course we will have to be better against a team like the Dutch, but there were a lot of good things to take from this game.”

Germany were missing stars like Bastian Schweinsteiger and Miroslav Klose with injury while captain Philipp Lahm was rested, but a young team – the average age was 23 – was caught cold on a night of sub-zero temperatures.

Hanover 96 goalkeeper Ron-Robert Zieler, 22, made his debut, but endured a torrid first-half by conceding three goals in the opening 45 minutes.

“This sort of thing doesn’t normally happen, but it’s a lesson and it will not happen to us again,” said defender Mats Hummels.

Germany pulled a goal back to make it 2-1 on 39 minutes when Bayern Munich midfielder Toni Kroos rifled a shot home from outside the penalty area, but replacement Serhiy Nazarenko fired home to put the Ukraine 3-1 up at the break.

Leverkusen captain Simon Rolfes came off the bench to pull a second goal back for Germany to make it 3-2 on 65 minutes before Thomas Müller hit the equaliser on 78 minutes to save German blushes.