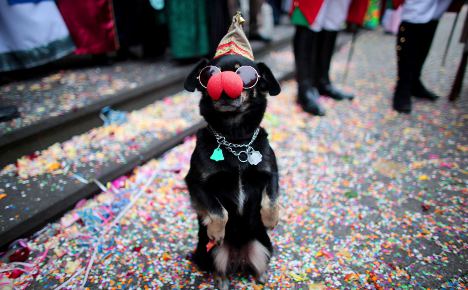 Particularly in the Rhineland, revellers take to the streets to welcome in a tradition rich in history, superstition and imbibing.

Hoards of Jecken, jesters or fools, descend on town squares. City halls are stormed with many of the rabble enjoying free beer given away inside. The jesters demand the symbolic keys to the city, unlocking inhibitions until Ash Wednesday when the atmosphere sobers up.

The traditional Hoppeditz rascal will charge around the streets in Düsseldorf, in Cologne thousands of partiers will descend on the old town, and in Mainz the official Karneval rules will be read aloud. And many Karneval die-hards will even precede the festivities with a traditional boozy breakfast.

The real celebrations, however, don’t get fully underway until next February on the run up to Lent. Then, whole cities are transformed as tens of thousands of fancy-dress clad merrymakers chant along to traditional Karneval music and consume considerable amounts of beer.

The origins of Karneval can be traced back deep into the middle ages but reasons behind the choice in date and the importance of the number eleven are endless.

It is seen from the exact time the celebrations kick off, right down to the number of people sitting on the ‘Karneval Council’ – the body in charge of organising the festivities.

Some say eleven is a foolish number, others consider it to be lucky – a symbol of equality and balance where social rules between rich and poor, men and women are abandoned – fitting for the party spirit during Karneval.

The idea of 11 being lucky is also one of the superstitions driving loved-up couples to registry offices have been experiencing a rush of couples wanting to get married on the seemingly auspicious date 11/11/11.

Head of Cologne’s registry office Angelika Barg warned, however, that “marriage is a serious affair and not just something to do because it’s an unusual date.”

Nevertheless, at 11am, 11 lucky couples tied the knot in a cable car swaying high above the Rhine River and 133 pairs plan on pledging life-long commitment throughout the day.

The head doctor of Cologne’s University Clinic, Markus Valter, also delivered twins exactly as the clock struck eleven minutes past eleven via a caesarean. “As a loyal Cologne man, I immediately thought of the beginning of Karneval when I noticed the date,” he said.

Elsewhere in Europe, however, the eleventh of the eleventh has less festive connotations, particularly in the United Kingdom, where two minutes silence is held at 11am in memory of soldiers who have died in combat. The United States also marks Veterans Day on November 11.