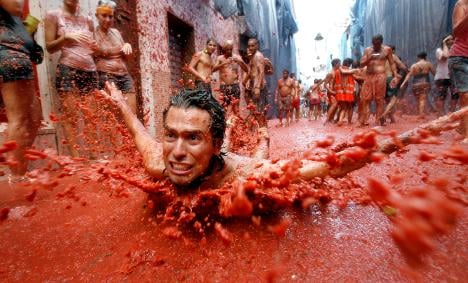 A survey conducted for the www.lastminute.de holiday booking website showed that 23 percent of those who order tomato juice during a flight told pollsters it was, “because I suddenly like the taste when in a plane” but that they would never drink it on the ground.

Just over half – 56 percent – said they liked tomato juice wherever they were, while 15 percent said they did not know why they drank it while travelling at 30,000 feet.

And a self-conscious one percent said they drank tomato juice because they thought it made them look like experienced air travellers.

The survey of 1,000 passengers published on Thursday showed that 27 percent of them drank tomato juice when in a plane.

Andrea Burdack-Freitag, an aroma chemist at the Fraunhofer Institute for Building Physics in Holzkirchen, Bavaria, has conducted experiments for Lufthansa to help them develop in-flight menus.

“In the air, food and drink tastes as it does when we have a cold,” she said in a statement. The reduced pressure in a plane cabin when it is in the air affects the way in which tastes are experienced, she said.

Her work takes place in a low-pressure chamber containing a section of a plane where test subjects eat experimental recipes under simulated flying conditions.

Burdack-Freitag has already confirmed that salt is much less effective at altitude – up to 30 percent according to her tests.

Sugar is also less intensely perceived – to the tune of 30 percent. Yet fruity aromas and acidic tastes remain pretty stable at reduced pressure.

This may go some way to explain why Lufthansa serves around 1.7 million litres of tomato juice to its passengers each year.

“Under cabin pressure in contrast, it is described as pleasantly fruity in its aroma, and with a sweet, cooling taste impression,” she said.