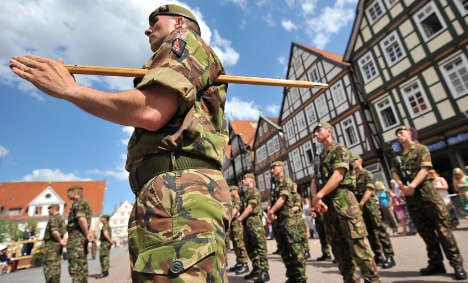 Around 1,800 troops will be relocated to sites in the United Kingdom starting in January, a statement from the British Ministry of Defence said.

The strategic defence review announced last October that half of the nearly 20,000 British troops currently stationed in Germany would return by 2015, with the rest leaving by 2020.

Details of army base moves announced on Thursday included the departure of the 7 Regiment Royal Logistic Corps from Bielefeld to Cottesmore, Leicestershire, enabling the move of HQ British Forces Germany (BFG) from Rheindahlen, Mönchengladbach, to the Bielefeld base – and the complete closure of the Rheindahlen military complex by 2015.

The 43 Close Support Squadron RLC will leave Gütersloh for Oxfordshire, affecting around 120 service personnel and their families to also enable the closure of the Rheindahlen complex.

The Trenchard Barracks in Celle and the Münster station will be handed back to the German authorities, the statement said.

“It is all very sad,” Lt Col Phil Jones told The Local on Thursday. The BFG chief of media said he had personally spent much of the last 16 years at postings all across Germany.

“We now have quite a broad-brush plan of who is moving where. We will still have quite a lot of people here for a few years, but we will be moving into the centre of Germany and Bielefeld will be the heart of British operations when Rheindahlen closes,” he said. “It will be a huge wrench when we actually go, it will certainly be the end of an era; it is the end of a very long association.”

He said there was real sense of sadness among local communities that the British troops were leaving.

“The impact of our departure will be quite harsh on some communities – while I know many people within the military who have spent a lot of time in their careers in Germany and they are feeling a real sense of loss.”

While the Ministry of Defence statement said it estimated the withdrawal of troops from Germany would save £250 million (€293 million) a year, which is considered to be the additional cost of having them there.

Crucially for the German communities which will lose their British armed forces contingents, a further £650 million (€762 million) is expected to be added to the UK economy as wages are spent there rather than in Germany, the Ministry press release said.

British forces contribute an estimated €1.3 billion to the German economy each year. Some 20,000 soldiers and 23,300 dependants and UK civilian employees are joined by 4,650 locals working at 12 bases in North Rhine-Westphalia and Lower Saxony.

German communities have long been fearing the economic impact of the final departure of the British troops.

British Ambassador to Germany Simon McDonald wrote letters to the state premiers of Lower Saxony and North Rhine-Westphalia to inform them of the plans.

His letter to Lower Saxony state premier David McAllister said that the Celle barracks would be returned by the start of 2013 after the 2nd Battalion of the Royal Regiment of Fusiliers have been moved to Cyprus in July 2012.

His letter to NRW state premier Hannelore Kraft was similar, telling her of the plans to leave Münster by the middle of 2014.