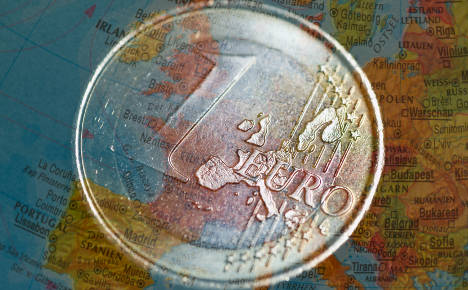 “We have a single goal and it is to stabilise the eurozone as it is today, to make it more competitive, to make progress in balancing budgets,” she told reporters when asked whether the eurozone must prepare for debt-mired Italy to exit.

“We believe this common euro area is also capable of thoroughly winning back its credibility, that means for every single country,” she said after talks with Romanian President Traian Basescu. “That is the reason we have always said that solidarity with a country is linked to efforts toward budgetary consolidation.”

Merkel called for Italy’s political situation to be rapidly clarified after Prime Minister Silvio Berlusconi announced he would resign after economic reforms are adopted.

“I believe that it is extremely important … the political leadership is clarified as quickly as possible since that, I believe, is very important for Italy’s credibility,” Merkel said.

She also wished a new Greek government “all possible success” in grappling with its own debt drama, which has plunged the eurozone into the worst crisis in its history.

“Germany will do all it can to work as well as possible” with the new Greek administration, after Greek President Carolos Papoulias asked former European

Reports from Brussels on Wednesday night suggested that Germany and France were considering allowing eurozone countries unable to get their economies on track, to leave the currency area.

Merkel is likely to face pressure to do exactly that from within her conservative Christian Democratic Union (CDU) at a party conference next week. MPs are preparing a motion which calls for countries to be allowed to opt to leave the currency union – but remain within the European Union, according to the Handelsblatt daily on Thursday.

“The strategy until now of defending every millimetre of the eurozone is, in the long term, the most expensive solution for Germany,” the paper quoted CDU Euro MP Markus Pieper as saying.

The European Union’s Lisbon Treaty, the bloc’s rule-book, does not provide for a country to quit the eurozone without leaving the European Union, the EU’s executive arm said last week.

Another CDU proposal to overhaul the balance of power within the European Central Bank is also likely to feature at the party’s congress in Leipzig on Monday and Tuesday.

The party wants votes at the bank’s policy-setting governing council to be weighted according to a country’s economic size and importance, rather than each of the 17 eurozone member states having an equal say, as is currently the case.

European Currency Commissioner Olli Rehn warned on Thursday that the escalating crisis could plunge the whole of Europe into recession. “Growth in Europe has reached a standstill and there is the risk of a renewed recession,” he said.

If the aid for Greece fails to bite into the country’s debt mountain, that could reach nearly 200 percent of gross domestic product over the next two years, warned the Commission in its autumn forecast.

European Commission President Jose Manuel Barroso also warned against talking up the possibility of splitting the European Union between euro and non-euro countries. “A divided union would not work,” he said during a speech in Berlin on Wednesday night, the Handelsblatt reported.

He said stronger integration within the eurozone on economic and finance policy was important but should not be followed at a cost to the non-euro states. The European Union as a whole and the eurozone belong together, he stressed, while urging more countries to join the common currency.

“All EU members should have the euro as their currency,” he said. But then he said the slowest state in the EU should not be allowed to dictate the speed of further integration, while there must be security provision for those which opt out or move at a slower pace. At the same time, Barroso said no member state should be allowed to hinder others from further integration.

Head of the eurozone group, Luxembourg’s Jean-Claude Juncker, said the debt crisis currently shaking the region was due to poor state finances rather than being a specific euro problem. “It makes me angry when I hear that the euro is in crisis,” he said, according to the Handelsblatt.

Former German Foreign Minister Joschka Fischer added his voice to the debate, calling for an “avant-garde” European Union to be formed from the 17 eurozone states which would tighten political links, leaving those without the common currency behind.

“Let’s forget the EU of 27. Sadly. But I simply do not see that theses 27 states can manage to undertake any kind of meaningful reform,” he told Thursday’s edition of the weekly paper Die Zeit.

Those countries with the euro should instead take the Schengen border agreement as an example and, “create an avant-garde,” he said.