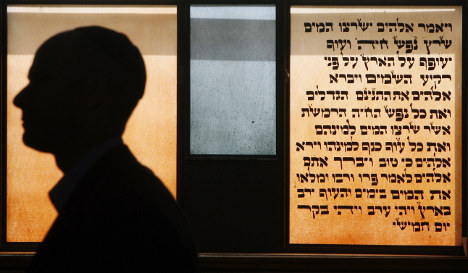 The Arabic Film Festival Berlin wraps up Thursday with A Husband’s Confession, Egyptian director Fatin Abdel Wahab’s 1964 tale of domestic distrust. Watch the rarely shown feature film in Arabic with English subtitles then enjoy a post-movie chat with your buddies at the closing party at Al Hamra.

Their band name means “The Traveller” in Arabic, and with a sound that fuses Baltic soul with North Africa dance beats, the Freiburg rockers do take their audiences on quite a trip. Help celebrate the release of their new album The Ride Saturday night in Berlin.

There’s something so magical about bubbles – the way they float through the air, reflect the light with their shimmery curves, and then burst dramatically, leaving their all too short lives far behind them. Tomas Saraceno’s bubbles don’t ever die. At least not until the exhibition comes down. Take a stroll through the Argentine artist’s “Cloud Cities” this week at Hamburger Bahnhof, and spend some time within the confines of his fantastic orbs.

Film “giants,” a French director, and students from Beit Berl College in Israel are among the diverse filmmakers presenting short movies at this year’s Unlimited Festival. Many of the little cinematic gems screen either in English, with English subtitles, or without dialogue, offering plenty of options for anglophone cinephiles.

London was swinging in the 1960s, and fashion was at its epicentre. Feast your eyes on the mod mystique of Michelangelo Antonioni’s black and white thriller Tuesday at Pupille, the cinema at Frankfurt’s Johann Wolfgang Goethe-Universität.

Edith Piaf they are not. But with their slight frames, cute hair cuts, and stage charm, you’d never know it. Pauline Croze, Belle du Barry, and Pauline Paris are chanter-ing their way around Germany, Serbia, and Poland, offering their Eastern neighbors a taste of modern French music with a feminine edge. Catch the gamine chanteuses in concert in Frankfurt this Thursday.

Noise From the Parlour – Pop, Art, and Cassettes

In the early 1980s, Felix Kubin churned out radical new sounds on his hi-tech-for-the-time instruments; Alfred Hilsberg churned out records on his “Zigzag” label; and Werner Büttner put paint to canvas in an array of subversive techniques. Hear the guys talk about the scene they pioneered and how it affected what’s going on today. It’ll be in German, but the images and sounds will make it worthwhile for the silently awed uncomprehending.

Works by Diane Arbus, William Eggleston, Lee Friedlander, Wolfgang Tillmans, Jeff Wall, and 26 other photography giants comprise a new exhibition at Hanover’s Sprengel Museum. Offering an overview of artistic photography from the 1960s to the present day, this show will capture the hearts of photo fans big and small.

A Yiddish rock show, a tribute to Hollywood composer Werner Richard Heymann, and theatrical adaptations of the poems of Nelly Sachs and Selma Meerbaum Eisinger are a few highlights of this year’s festival of Jewish culture in Munich. Israeli singer Chava Alberstein kicks off the diverse program Saturday at Gasteig.

Learn how to make risotto like a true Italian, or discover the secret of fluffy pancakes. Just in time for the holiday madness, Eat&Style sets up their kitchens and cooking classes at Munich’s Zenith Culture Hall. Take home a few tricks from the pros and indulge in deliciousness this weekend.

Building With Timber – Paths into the Future

Fine grain. Smooth sanded finish. Oh wood. You truly are a thing of beauty. And structurally, your potential is grand. Get the details on timber as a sustainable building material, and check out some stunning examples of modern timber constructions from around the world at a new exhibition opening Thursday at the Pinakothek der Moderne.