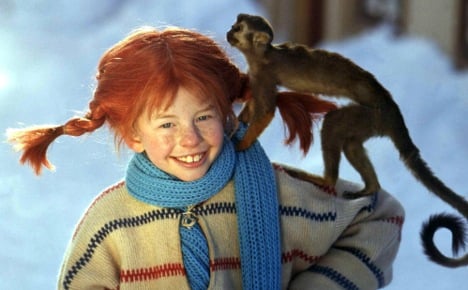 Dr. Eske Wollrad from the the Federal Association of Evangelical Women in Germany first made her comments as a speaker at a state conference on anti-discrimination in Leipzig last weekend, stirring debate in the German media.

“It is not that the figure of Pippi Longstocking is racist, but that all three in the trilogy of books have colonial racist stereotypes,” Wollrad told The Local on Tuesday.

The publishers had already changed the original phrase used for her father as king of a South Seas island from Negro King to South Seas King, noted Wollrad, who is advisor for equality and social responsibility at the Protestant women’s group.

But other passages in the much-loved books were also problematic, she said.

“The black children throw themselves into the sand in front of the white children in the book,” she said. “When reading the book to my nephew, who is black, I simply left that passage out.”

She said there were many such sensitive areas in the books, which were written by Swedish author Astrid Lindgren in the 1940s.

“I would certainly not condemn the book completely – on the contrary, there are many very positive aspects to the book, as well as being very funny, it is instructive for children as it not only has a strong female character, she is against adultism, grown-ups being in charge, and she is fiercely opposed to violence against animals – there is a very strong critique of authority in the book.”

But Wollrad would like to see additions made in the books to guide readers at such points where the original text was racist. “The question to ask yourself is whether you could read a certain passage out loud to a black child without stopping or stumbling,” she said. “Only then can you say whether it is okay or not.”

Footnotes for such passages could be a helpful aide to those reading the books – either to prompt discussions or to help readers put racist terms into context.

“It simply isn’t helpful if we want to help our children find their place in a multicultural society,” she said.

“A third of children under the age of five in Germany are from a migration background,” she said. “Publishers seem to think it is only white, middle-class women buying these books. We as consumers have to show that this is not good enough.”