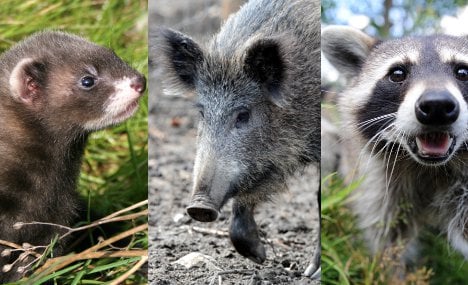 One of the main causes of cross-species confrontation is the amount of food available on the streets – as well as urban intrusion into rural areas. Bins are overflowing and the German penchant for the compost heap provides rich pickings for animals in urban areas.

“We are a throwaway society,” said professional falconer and hunter Wolfgang Schreyer. “In Munich there is an unimaginable amount of food available.”

He added that over the past 10 years, the number of foxes trotting around Munich’s streets has skyrocketed.

In the Munich area martens are becoming increasingly problematic. Despite looking cute, they cause thousands of euros worth of damage to cars each year with their appetite for plastic-covered cables.

A flock of between 700 and 800 geese is also dirtying huge areas of the city’s attractive green land.

Kassel, in Hessen, is becoming famous among wildlife watchers – and hunters – for its considerable raccoon population.

“Currently there seems to be 100 of the creatures in 100 hectares” said Hartmut Bierwirth of the Kassel hunting authority. “All the food available makes for great living conditions.”

He added, however that the problem was under control because “people in the area have learned to deal with the animals.”

In Mecklenburg-Western Pomerania however, the top troublemaker is the wild boar. They ransack allotments and dig up parkland, breaking through fences and knocking over bins in their hunt for food, according to reports from local councils.

“Around 100,000 square metres have been laid to waste by wild boars in Rostock alone” said the city’s head of parkland Jan Eisenberg.

Hamburg has been home to wild animals for the past 20 years, with hares, stone martens, foxes and wild boars causing a nuisance on the city’s streets.

Shooting wild animals is only allowed in extreme cases with special authorization in German cities, so experts are recommending the ‘prevention rather than cure’ approach to stem the flow of wild animals into the cities.

Their advice includes limiting the careless disposal of waste, and the use of sturdy, high fencing around green areas.