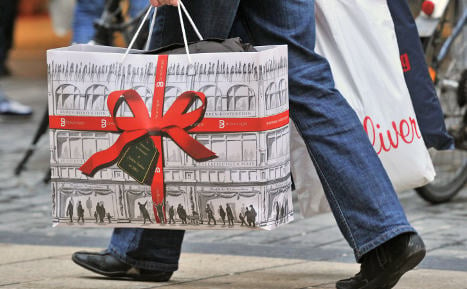 The average each shopper intends to spend on gifts dropped from €233 to €213 this year, according to a survey of 2,000 people by Ernst and Young. This is the lowest level since the annual survey began in 2007.

Thomas Harms, business expert at Ernst and Young, put the sinking figures down to a climate of financial uncertainty resulting from debts and rocky stock markets.

“The money is there, but people are shying away from spending it on gifts,” he said.

Small shop owners may be right to fret, as shoppers questioned admitted they only planned to spend an average of €100 there – €32 less than last year.

However, department stores and shopping centres should prepare themselves for more of a rush, as the average planned purchase there has increased by €10, to €50 per shopper.

Only 22 percent of shops have confirmed they will be hiring seasonal staff this year, reported Ernst and Young, while four percent will be making staff cuts.

An increase in online shopping is also increasing high street concern, as those who choose to do their shopping on the web are planning to spend €40, which is €4 more than in 2010.

Like last year, two of the most frequent packages under the Christmas tree will be books and gift vouchers, as the percentage of people planning on giving books has risen from 58 to 62 percent. The average German plans on spending €26 on books, €3 up from last year’s figure of €23.

However sinking profits are something many other sectors will have to face. The average amount of money that shoppers plan to spend on electronic entertainment items alone is €3 euros lower than in 2010, at €16.

Harms said “Yes, investment may be slightly up and unemployment down, but proceed with cautious optimism when Christmas shopping this year.”