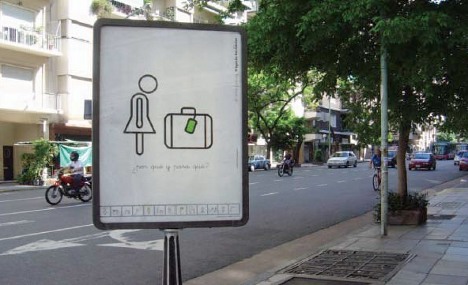 After a week of reflection, children aged nine to 11, together with the women behind Migrantas, took photographs of their daily school life and made a cartoon-like video.

An exhibition of their efforts opened last Wednesday at Berlin’s Haus der Kulturen der Welt. The video will be displayed on screens in the city’s U-Bahn metro trains through November 9.

The Migrantas collective formed seven years ago, when artist Marula Di Como and graphic designer Florencia Young joined forces with sociologist Estela Schindel to create a place where primarily women could step back and explore what being an immigrant means to them.

The three women hailing from Argentina were joined later by German urban planner Irma Leinauer and another Argentinian, journalist Alejandra López. However, the language of the Migrantas project is neither German nor Spanish – it’s the pictogram.

The group’s latest project, “Europa-Kind + Europa-Schule: Bilder der Vielfalt,” veered away from their usual demographic of women’s integration groups or language classes, and entered the classrooms of three state-run bilingual schools in Berlin.

As the ultimate outcome of their workshops, the pictograms are developed from sketches done by women or children. The focus rests less on the aesthetic, but more on the message that they intend to convey.

Certain themes seem to run through the 70 pictograms that have already been exhibited in cities around the world. Loneliness, confusion, being overwhelmed are some of the negative ones, but pictograms depicting the learning of new skills, making new friends and feeling accepted also feature heavily.

Di Como already had experience in using pictograms and approached graphic designer Young to help make them into images suited for eye-catching public display. They created the final pictograms together.

They have so far appeared on billboards, public transport, bags and postcards, in an effort to speak to the millions of immigrant women living in Germany.

“We are not a feminist group, but have just found that in some groups of women, having no males present makes it easier to talk about certain topics,” Young told The Local.

“When running the workshops we’ve seen recurring themes of children, families and the future, which I think are female issues,” added Di Como.

They produce simple and poignant cartoon-like images, which are open to interpretation by everyone, independent of language. And so far, the group has worked with people from 72 different nationalities, each with a different background, social standing, and story to tell.

“The Migrantas philosophy is that we don’t have something to say, but something to show,” Young explained. “We expose the results of a project and everybody interprets it differently. There’s no pre-planned statement to our pieces.”

The group’s latest project received €17,800 from the Berlin Culture Fund to work with children at the Turkish-German Aziz-Nesin-Grundschule in Kreuzberg, Spanish-German Joan-Miró Grundschule in Charlottenberg and the Italian-German Finow-Grundschule Schöneberg.

“We started the week by introducing ourselves and our backgrounds, then encouraging the children to do the same,” said Young. “What was especially interesting was that even the teachers didn’t seem to know much about their pupils’ heritages.”

Nine-year-old Anna, a pupil at the Joan-Miró Grundschule said she hadn’t thought before about whether she was German or Spanish.

“I found it really cool to make videos and take pictures,” she told The Local. “I don’t think about the fact I am German and Spanish, for me it’s normal. I’m just both.”

Her acceptance of other cultures and the normality of being bilingual shined through in the pictogram-style video, a refreshingly innocent tribute to having mixed-heritage.

This positivity is something that Migrantas are keen to convey. “We don’t just deal with integration problems, we want to show migration in all its diversity, so both the negative and positive aspects,” said urban planner Leinauer.

However, when asked whether a specific pictogram had spoken most to the Migrantas women, Young explained that the collective’s logo – a woman standing, head hung, with a suitcase reading, “Why? And what for?” struck a chord.

“It doesn’t matter if we are educated or not, have citizenship, or where we are on the financial spectrum. We are all still immigrants,” she said, adding that “the idea of not belonging is the umbrella under which we all stand, that’s why Migrantas started.”

However, Migrantas are using the concept of not belonging as a step into the exploration of mobility, migration and trans-culturalism, and in turn helping them to become the norm in Germany.

“I think it’s a positive thing, having more than one culture is something that is added to us and our children when you look at it positively,” Leinauer said. “As an immigrant, you have more than one reality. You can switch between the two as you please.”