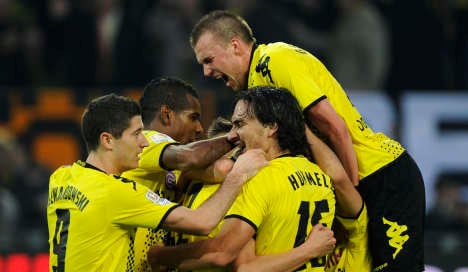 Kagawa set up both the first and fourth goals for Dortmund, as well as netting one of his own, while Götze scored twice as defending champions Dortmund romped to an impressive home win.

Borussia’s victory puts them second and trims Munich’s lead to two points at the top ahead of their game against bottom side Augsburg on Sunday.

“A touch of arrogance saw us lose the clean sheet, but the team responded immediately.”

The win came at a price as defender Neven Subotic is expected to miss the next six weeks, including Champions League games against Arsenal and Marseille, with a fractured cheekbone.

The hosts took the lead on 13 minutes as Kagawa played Gözte into the penalty area for the 19-year-old to rifle his shot into the bottom left-hand corner.

Kagawa made it 2-0 just before half-time, when he was put into space by Poland striker Robert Lewandowski and the Japanese winger fired past Wolfsburg goalkeeper Diego Benaglio.

Former Arsenal and Barcelona star Alexander Hleb, who was making only his second appearance after signing for Wolfsburg at the start of the season, kept 2009 German champion Wolves in touch with a goal on 59 minutes.

But a header from midfielder Sven Bender two minutes later put Dortmund back into a 3-1 lead before Kagawa produced a defence-splitting pass from deep which put Lewandowski free to fire past Benaglio on 66 minutes.

Götze completed the rout 12 minutes from time, as Dortmund look to be back to their best after a slow start to the season.