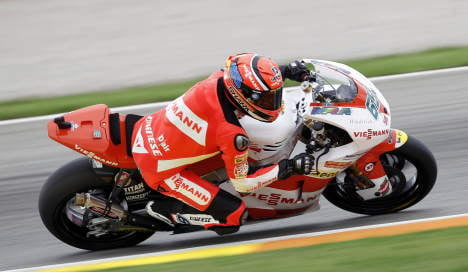 Suter team rider Marquez waited until just before qualifying before deciding that problems with vision, suffered in a crash two weeks ago in Malaysia, meant he was unfit to tackle the final, title-deciding race of the season on Sunday.

Bradl, however, already had one hand on what is his first world title. To triumph, Marquez would have had to win the race and hope for Bradl to finish beyond 13th place.

The 21-year-old German, the son of former 250cc racer Helmut Bradl, enjoyed a blistering start to the season winning four of the opening six races.

Marquez surged back into contention for the title by claiming six wins in seven races midway through the season.

However his crash in testing two weeks ago in Sepang – which was down to a signalling error on the part of race officials – set back his late bid to wrest the title from Bradl.

With Italian rival Andrea Iannone over 100 points adrift in third, Bradl is assured of the title and Marquez will finish runner-up.