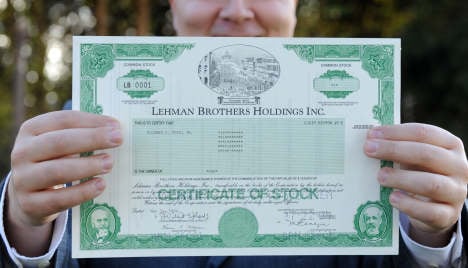 With the serial number 001, the stock paper had been hanging in the office of Lehman Brothers CEO Richard Fuld until the bank declared bankruptcy, sending financial markets worldwide into a tailspin.

The certificate dates from 1994.

In the run-up to the auction, the chairman of the HWPH auction house for historic investments in Würzburg, Matthias Schmitt, called the item “the ultimate (stock) certificate of the financial crisis.”

He said 10 hopeful buyers placed bids for the share online and via telephone. “What happened here was just crazy,” he said, describing the massive interest from bidders.

A minimum bid had been set at €5,000, but the very first offer was more than double that amount, at €10,500. The auction house had been expecting a final bid in the five-figure range.

Schmitt would not comment on the identity of the successful bidder, saying the buyer wanted to remain anonymous.

The auction took place just a few kilometres from the Lehman brothers’ hometown. Henry, Emanuel and Mayer Lehman left the Würzburg area between 1844 and 1850 for the United States, where they founded a firm of the same name.