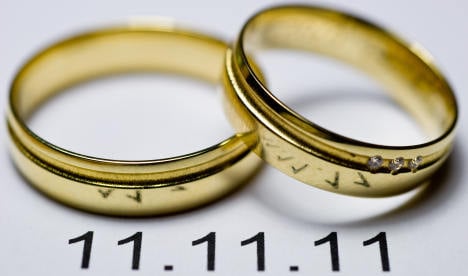 According to a survey by German news agency DAPD, appointments on November 11 have been fully booked for weeks at many civil registry offices, including those in Osnabrück, Hannover and Kiel.

Hannover normally performs 28 marriages on a regular Friday, but this time around staff will have more than double the number of appointments to get through, with 57 scheduled.

In Frankfurt, workers will be performing nuptials until 11 p.m. Thirty-six couples are tying the knot at the city hall, but the registry there is taking pains to make sure each pair feels special.

“It’s important that colleagues can give each bridal couple the feeling that they’re only there for them,” said Andrea Hart, director of the office.

The story is similar in the German capital: 33 couples are getting married at the registry office in Reinickendorf, while 26 pairs have opted to tie the knot in Berlin’s hip Mitte district.

“We’ve had a bit of a run at the end,” said Ariane Schimansky, head of the Reinickendorf office. Marriages there are taking place every 20 minutes, and the office has canceled its consultation hours.

In Aaachen, the civil registry office is completely booked on November 11, with 20 marriages on just one day compared with 60 to 70 during a normal month.

“People want something special, and the date is easy to remember,” said the office’s director, Lothar Linden.