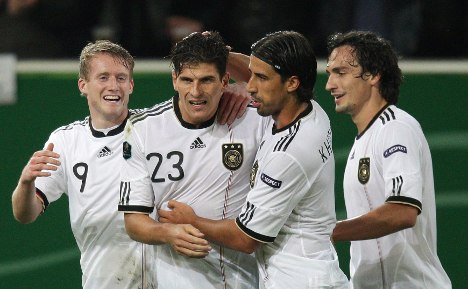 That is the most the DFB has ever offered its national players for winning the biggest European competition, matching the reward the players would have taken home if they’d won the 2006 World Cup in Germany, and a nice chunk more than the €250,000 they would have received if they had won the 2010 World Cup in South Africa.

The highest tournament bonus the DFB has ever handed out was €150,000 per player for the 1-0 defeat to Spain in the final of the 2008 European Championship in Austria.

The DFB said Friday that the increased bonus was due to an increased income from European football’s governing body UEFA, which will reward the winning football association with €23.5 million.

This is a financial reward that Germany’s previous national teams could only dream of. The world champions of 1954 famously received 2,500 Deutsche Marks, a leather suitcase, a black-and-white TV and a moped, while the 1974 world champions, led by Franz Beckenbauer got DM 70,000 plus a Volkswagen Beetle.