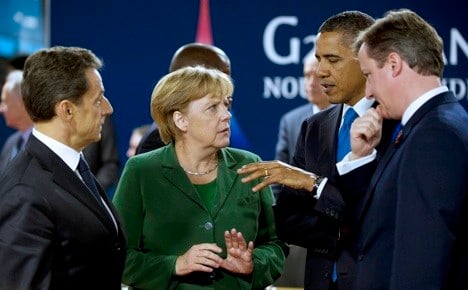 “For us, it’s actions that count,” Merkel said after statements by Greek Prime Minister George Papandreou that he was ready to drop plans to hold a referendum that had enraged eurozone partners.

“What’s important is that there is a quick ‘Yes’ to the October 27 decisions,” she added, referring to last week’s offer by eurozone leaders to write down Greek debt in exchange for imposing strict fiscal controls.

Merkel said what she and French President Nicolas Sarkozy told Papandreou at crisis talks on Wednesday remained in force. “The sixth (loan) won’t be released if Greece doesn’t accept” the bailout plan, she said.

Greece needs the next €8-billion slice ($11-billion) of aid by mid-December or faces the possibility of a messy default on its debt. Papandreou’s shock referendum announcement threw into doubt Europe’s plan to contain its debt crisis and roiled markets.

The October 27 package provides for writing off some €100 billion of Greece’s debt. It will also get another €100 billion in rescue loans, but have to continue to implement difficult austerity measures.

France, Italy, the United States and the EU Commission want the European Central Bank to do more to solve the eurozone debt crisis but Germany is opposed to the idea, according to a newspaper report released Thursday.

The daily Die Welt, in a pre-release of an article to be published in its Friday edition, said that at the G20 meeting, Paris, Rome, Washington and Brussels wanted the ECB to act more like its US counterpart, the Federal Reserve, and buy up bonds of debt-wracked countries on the primary markets.

So far, the limited purchases by the ECB have been on the secondary markets only, in an attempt to help ease the borrowing costs of the most indebted countries struggling to raise fresh funding.

Germany, for its part, is opposed to such a proposal, because it believes it would be tantamount to the ECB printing money to finance a country’s debt, the newspaper said.

“The ECB isn’t a Fed and not a Bank of England … and the US way to more ‘firepower’ is a way we cannot pursue in Europe,” a German government source said, following discussions ahead of the G20 summit in Cannes.

The way we see the role of the ECB in Europe, and especially in Germany, is maybe not shared all over the world but is accepted everywhere because that is the way it is,” the source said.