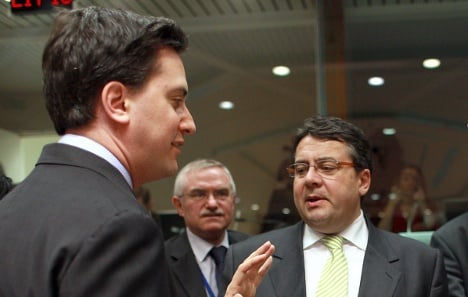 In a joint article on the Handelsblatt website in Germany and the Huffington Post in Britain, the three opposition leaders wrote that the world badly needed the G20 summit, currently meeting in Cannes, to show the kind of political leadership that has been lacking in the last 18 months.

“This is not the time for warm words and empty statements,” the leaders said, before citing GDP and unemployment figures that illustrated Europe’s current economic stagnation.

“First, we need a new deal based on the understanding that lack of demand is undermining the global recovery,” they said, referencing the massive public works programme set up by US President Franklin D. Roosevelt during the Great Depression.

“Immediate collective austerity simply will not work,” the article says. “Developments in the eurozone show that the IMF’s Christine Lagarde was right to warn: ‘slamming on the brakes too quickly will hurt the recovery and worsen job prospects.’”

Instead, the centre-left leaders want to see a more balanced approach. As well as introducing a financial transaction tax across all major finance centres, the leaders are calling for a plan that combines labour market support and spending cuts, similar to the one President Barack Obama set out in the United States.

On top of that, the three politicians want to see the separation of retail and investment banking and more regulation of the rating agencies. “People across the world understand it was flaws in free-market capitalism that caused this crisis,” the article says. “They need to hear the positive case for responsible capitalism which will get us out of it.”