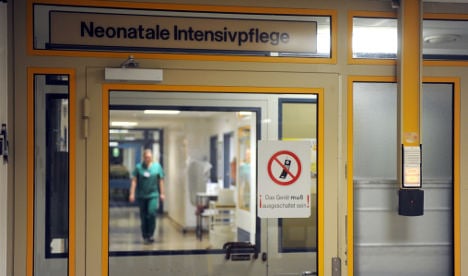 Two children died in October and the other in August after being infected with a klebsiella bacteria, according to the authorities.

The clinic has closed its neonatal unit as a precaution while the Robert-Koch Institute, which deals with health protection, investigates the source of the bacteria. State prosecutors have also launched an investigation.

Another twelve children are believed to be infected, local health councillor Joachim Schuster said at a press conference, but their lives are not thought to be in immediate danger.

The babies died on August 8, October 16 and October 27 as a result of what the clinic described as a “grave hygiene-related incident.”

“We did of course introduce measures in the unit to prevent the bacteria spreading,” said clinic director Diethelm Hansen. He said that the number of infections dropped as a result, until the second baby died in October.

Hansen also underlined that bacterial infections are common in premature babies, who have a very vulnerable immune system. “As long as they are kept to isolated cases, there is no need to act,” he said.

Measures are taken when the number of infections from the same bacteria increase, as happened in October, he added.

“The origin is extremely difficult to find,” said Schuster. “The bacteria could have spread via a person or an object.”

Politicians are demanding a detailed investigation, especially into why it took so long for the outbreak to be made public. Rainer Bensch, of the Christian Democratic Union (CDU) faction in the Bremen parliament, called on city Health Minister Renate Jürgens-Pieper to report all known details.

He added that if one of the deaths did indeed occur in August, the failure to report it was a “serious violation of the minister’s communication duties.”

The German Society for Hospital Hygiene (DGKH) estimates that 40,000 people die every year from bacteria picked up in hospitals.

There have been several cases of infant deaths at German hospitals in recent years.

Three other premature babies died within two days in a hospital in the central western city of Siegen in September, though the cause of their deaths has yet to be explained.

And in August 2010, three premature babies perished in Mainz after they were given contaminated drip feeds. No-one was prosecuted for the deaths since police failed to find enough evidence of criminal negligence.