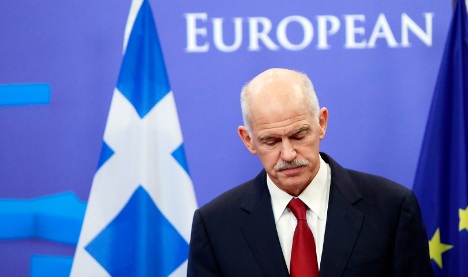 “For us, it is actions that matter. We agreed a programme with Greece last week. And from the EU side, at least for Germany, we want to implement this programme,” Merkel told reporters.

“For this, we need clarity and that’s what these talks tonight are about,” added the chancellor.

Merkel, along with French President Nicolas Sarkozy, top EU officials and the head of the International Monetary Fund, were set to meet George Papandreou later on Wednesday before a summit of the G20 group of top economies.

She said Germany noted the decision to put the package to a popular vote.

“I can’t say any more than that on the subject now. I can only say that we have to come to a point where we know what comes next,” added Merkel, speaking at a joint news conference with Turkish Prime Minister Recep Tayyip Erdogan.

Earlier, she had quipped that she loved Greeks “when they act reasonably.”

Meanwhile, in Athens, Papandreou was battling for his political life after narrowly securing cabinet backing for the controversial referendum ahead of a confidence vote in his government.

A three-day debate on the vote of confidence was due to start in parliament late on Wednesday as new protests were planned later in the week against nearly two years of austerity policies.

For his part, Erdogan said that the crisis was a matter for those within the 27-member European Union bloc but said he “hoped for a positive outcome.” He was also due to fly to the G20 meeting in Cannes, southern France.

At an earlier news conference, Merkel’s spokesman Steffen Seibert said Berlin would have liked to have been warned in advance of Papandreou’s announcement, which appeared to catch everyone by surprise.

“In the interest of European cooperation it would have been preferable if the Greek government had informed Germany and its other European partners beforehand,” Seibert said.

He added that the run-up to Greece’s referendum must not result in lost time, as the financial markets and European politicians fret that the situation could worsen in the meantime.

“The time until the referendum must not be lost time either for Greece or for the eurozone,” said Seibert. “We cannot afford that in this international situation.”

Greece can count on Europe’s solidarity if it makes its own efforts “to restore its financial stability, its economic competitiveness,” he added.