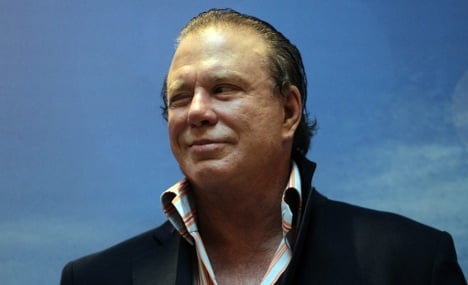 The 59-year-old star of “Iron Man 2” and “The Wrestler,” has had several bad experiences in Germany, it was revealed in an interview with the Berliner Kurier newspaper on Wednesday.

He has particularly bad memories of Hamburg from his brief stint as a professional boxer. “They booed me out of the ring,” the actor recalled of his fight against American Thomas McCoy in November 1993. “But I got my revenge this way [holds up both middle fingers] and won the fight.”

Rourke also has little respect for Germany’s renowned medical expertise. Once suffering from a torn bicep, Rourke was forced to undergo surgery in Heidelberg. “Don’t talk to me about Heidelberg,” the Oscar-nominated actor commented. “The doctors ruined my arm.”

He has now bought a house in the western German town of Wiesbaden for the sake of his girlfriend Anastasia Makarenko whose father “works his ass off” as a taxi driver in nearby Mainz. He said although Makarenko has great Slavic looks, she “unfortunately has a German personality.”

But Rourke could not face living there. “Mainz is a boring town,” the star has decided. “That’s why we live in Wiesbaden. I like it there. No paparazzi.”

Rourke inaugurated his star on the Hollywood Walk of Fame on Monday, where he broke down in tears as he thanked his grandmother.