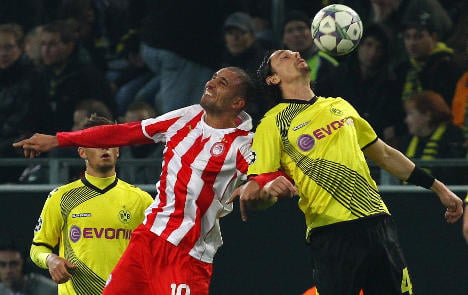 Dortmund breathed life back into their campaign on Tuesday when forward Kevin Grosskreutz hit the winner on seven minutes with a curling thunderbolt from outside the area that gave Olympiakos goalkeeper Balasz Megyeri no chance.

After consecutive defeats at Marseille and then at Olympiakos a fortnight ago, the win at the sold-out Signal Iduna Park was Dortmund’s first in Group F and takes them to within three points of second-placed Marseille.

“We had a little bit of luck here, which has been missing from our recent results,” said Klopp, whose team drew 1-1 at home to Arsenal in their opening Champions League match.

Klopp changed things round before kick-off as he switched to a 4-3-3 formation from the 4-2-3-1 system which saw Dortmund win the German league title last season.

He gave 18-year-old Moritz Leitner his first start alongside captain Sebastian Kehl and Germany star Mario Götze, himself still only 19, in a more compact midfield and Klopp said he was happy with Leitner’s performance.

“We got off to a good start and the guys at the back of midfield pushed forward,” he said. “We deserved the win after what was a very good goal.”

Dortmund were rewarded for their early pressure when Götze laid the ball off to Grosskreutz on the edge of the area and the 23-year-old smashed his shot home from 25 yards for his debut Champions League goal.

After Arsenal were held to a goalless draw by Marseille in north London, Dortmund’s four points mean they are four behind the Group F leaders and three adrift of Marseille, while fourth-placed Olympiakos have just three.

The German champions still have their work cut out, with a trip to Arsenal’s Emirates Stadium next on their European programme on November 23 followed by a tricky final home match against Marseille on December 6.

The defeat puts Olympiakos bottom of the group with a trip to Marseille and a visit from Arsenal still to come.