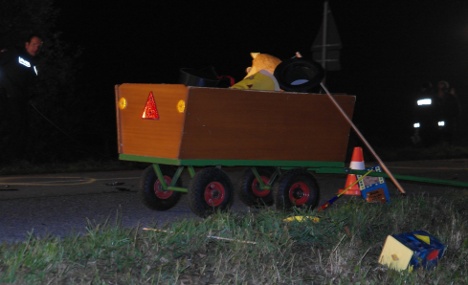 The cart is left at the scene of the accident in Rehden. Photo: DPA

Three people died in a crash on an Autobahn in Hesse on Saturday morning after three women stopped their car when it hit a wild boar that had already been hit and killed by another vehicle.

As the women pulled over on the A5 between Homberg/Ohm and Alsfeld/West, another car smashed into them – having swerved to avoid the dead boar.

The driver of the second car as well as two of the women in the first, were killed while the third woman was seriously injured.

Rescue services tending to the accident scene had to completely close the north-bound section of the A5.

On Friday evening two more women were killed while walking along the side of on a road in Lower Saxony near Rehden while en route to congratulate a friend on the birth of a child.

The group of 15 women – fully kitted out with festive lamps and visibility vests and towing a cart of presents – were hit by a car the driver of which it seems was dazzled by the headlights of an oncoming vehicle.

A 58-year-old woman died at the scene while a 43-year-old died of her injuries on the way to hospital. Three others from the group were slightly injured.

The 27-year-old driver was practically unhurt but like all those involved, suffered serious shock. A police spokesman said a criminal investigation for suspected negligent manslaughter had been started, but that the driver would not be questioned until this coming week as he was in such a bad state.