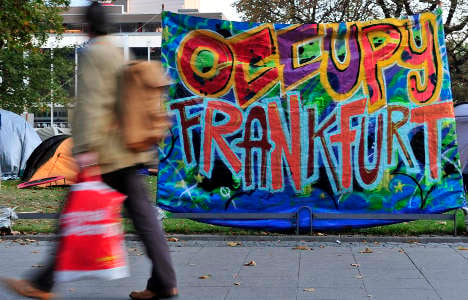 Beneath the gleaming skyscrapers that house some of Europe’s most powerful banking institutions, a committed core of protesters have huddled together in a small tent village to vocalize their opposition to what signs posted across their makeshift camp call the “dictatorship of the financial markets.”

Inspired by the demonstrations on Wall Street in New York, thousands of sympathizers have joined the Occupy Frankfurt movement and taken to the streets of Europe’s financial capital to protest growing social inequality in Germany and throughout the 17 member eurozone currency union.

As European leaders shuffled between summits last week in a bid to prevent the debt crisis in Athens from compromising the continent’s financial institutions, the Occupy protesters have hunkered down in front of the European Central Bank (ECB), the institutional nerve centre of the ailing eurozone.

“In principle it is about the injustice that is taking place, that the money that exists is very poorly distributed, and that a lot of people can live a lot better when a little more attention is paid,” said Daniel, a 24-year-old freelance IT worker who is participating in the demonstrations.

“We want to send a message to the politicians who at the moment are working against the people instead of for them.”

The growing disparity between the rich and poor is not the subjective impression of protestors like Daniel, but instead is a statistically proven reality, according to Dieter Rucht a sociologist at the Social Science Research Centre in Berlin.

Since German re-unification in 1990, the wages of lower earners has largely stagnated while the wealth of those with higher incomes has grown – a phenomenon confirmed by the Organization for Economic Cooperation and Development (OECD) and the Bertelsmann Stiftung.

Many of those participating in Occupy Frankfurt believe this widening income disparity is a result of the failure to establish transparency and appropriate regulations over how banks and other financial institutions generate profits within the marketplace.

“The profits don’t benefit the people, but instead they all flow into the banks and the whole financial market is undemocratic,” said Linda, a 32-year-old environmental consultant.

“It’s unjust and undemocratic that the people cannot participate in the decision making. When decisions are made over money, it occurs separate from the democratic process.”

These profits do not come from nowhere, according to Zsolt Darvas, an economist with the think tank Bruegel in Brussels. They are generated through risks on investments made with the savings of ordinary citizens as well as the charges and fees associated with other banking and financial services.

As banks agree to take a 50 percent hit on Greek government bonds, European governments have promised recapitalisation – with state money if necessary. It is a phenomenon that has shaken the faith of many young Germans in the economic and political system they have come of age in.

“For me personally, there are only two differences between capitalism and communism, “said 19-year-old Thomas, a Frankfurt native who works in a hospital and is taking part in the demonstrations.

“The trust in the ability of career politicians and policymakers to solve problems has clearly sunken, which has been strengthened by the current developments because they promised three years ago that this wouldn’t happen again,” Rucht said. “That’s devastating for democracy.”